I hadn't really thought about taking my future husband's name until I got a mass e-mail from a former Brown classmate last year. The subject line was "New Name, New E-mail." The message informed everyone that my classmate's e-mail address was changing. She was making her maiden name her middle name and taking her husband's last name as her own. 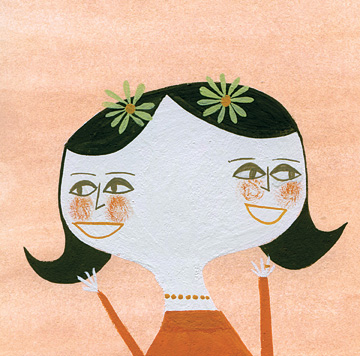 Upon reading this, I snorted to my fiancé, "I would never send an e-mail like that! I'm going to be Jess Grose until the day I die!"

"You are?" he said, looking genuinely upset, but trying to temper his voice.

"I guess so," I responded, surprised that it mattered to him, since he isn't a particularly traditional soul. "Do you want me to take your name?"

The more I thought about it, the more I had to concede that I've never really liked my last name. It was the subject of schoolyard taunts—"Jessica is GROSS!"—and perpetual misspellings—"It's Grose, not Gross!"

I started considering some other options. The idea of hyphenating my name with my fianc√©'s seems downright cruel: we'd saddle our offspring with an awful compound, Grose-Winton (or Winton-Grose). I briefly considered creating a new hybrid last name, but Wintose sounds like a gum additive ("Now with Wintose!") and Grinton sounds like a grim factory town in northern England. I remained conflicted.

I brought the matter to my longtime friends, all Brown women, to see what they thought.

"Part of what's bothering me about taking his name is it feels so antifeminist," I said to my friend Becca.

Becca thought about it for a moment. "Technically, taking your husband's name is just as patriarchal as keeping your father's," she countered. "And besides, is it really such a contentious issue anymore?"

She had a point. We're lucky enough to come of age at a time when marriage does not automatically sublimate our identities. It would be narcissistic to think that my decision affects the whole of womankind, rather than just my future husband and me.

When I told another friend I was thinking of becoming Jessica Winton, she was taken aback. "But that's an entirely different person!" my friend Anna said, adding that my name would lose its ethnic flavor. Everyone would assume I was a blonde. Ultimately, Anna's reasoning didn't really help me decide either.

Some of the best advice I got came from an unlikely source—another Anna, a friend since freshman year, who had the most unconventional upbringing of any of my confidantes. Her parents are dyed-in-the-wool hippies and she has a hyphenated last name. "I think you should take his name." she said. "You didn't think I would say that, did you?" I didn't. "I hate having a hyphenated name," she added. "And besides, I think it's sweet to take his name."

And that was the comment that finally sunk in; changing my name would be sweet. So I decided that in my professional life, I will use Grose and in my personal life, Winton. In the end, it is a relatively small thing—really just for driver's licenses and tax returns. But as a gesture to my future husband, it's immense.

Jessica Grose is an associate editor at Slate.

Reader Responses to A Sweet Decision