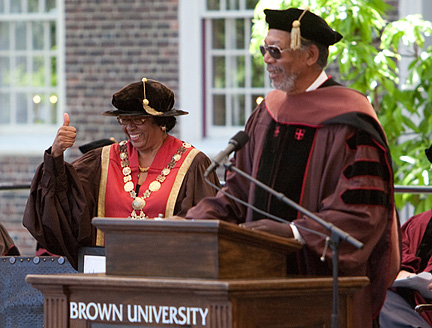 Barbara Liskov The first U.S. woman to earn a PhD from a computer science department, she is a pioneer in the design of computer programming languages.

Shahrnush Parsipur An Iranian-born novelist, she was imprisoned four times for her frank portrayal of women's lives in Iran. Although popular, her novels have been banned in her country.

Cecile Richards '80 President of the Planned Parenthood Federation of America, she has devoted her career to public service, voting rights, education, and advocacy.

David Rohde '90 While a correspondent for the New York Times, he was captured and held for seven months by the Taliban. He was earlier held by Bosnian Serbs and has earned two Pulitzer Prizes.

Romila Thapar A scholar and historian of ancient India, she challenged oversimplified colonial histories of India.

Gordon S. Wood The Pulitzer Prize– winning historian of the United States' early years, he joined the Brown faculty in 1969 and is now the Alva O. Way University Professor Emeritus.