Sarah Morris's paintings and films are preoccupied with cities and the social impact of urbanization, so it seems apt that her studio, on the fifteenth floor of a high-security building, has a spectacular view of the Manhattan skyline. There, she and her assistants juggle multiple large-scale projects destined for cities around the globe. On her slate this spring were solo exhibitions in Seoul and Biot, France; and public art projects in Germany, Norway, and New York City. 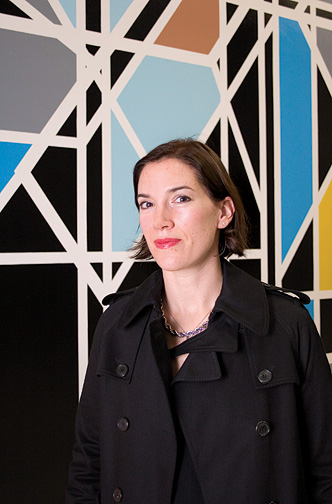 Courtesy Sarah Morris
Sarah Morris at the Palais de Tokyo in 2005.
Morris's workspace looks more like an office than an artist's studio. In the front room, two big iMacs face each other on white desks stacked with reference books. The walls are lined with digital proofs and metal shelves full of books, many of which are about Morris's own work.

At Brown, Morris concentrated in political science and literature and society, and as she talks it becomes clear that studying political philosophy and aesthetics has shaped her art. For her, the history of a color and the particular references it evokes are just as important as its visual qualities. Tellingly, she says her favorite course was one that modern culture and media professor Neil Lazarus taught on "commodity aesthetics," which explored the political content inherent in aesthetic choices.

After graduation, Morris moved to New York City, where she entered the renowned Whitney Independent Study program. "Hal Foster, a leading post-modern theorist, had seen my work and invited me to apply," she recalls. "There wasn't a specific course of study in the program, nor were degrees granted, but we got studio space, time to make art, and the experience of being part of an extraordinary art community." She started painting, and in 1992 had her first solo show in New York.

By the mid-1990s, Morris was beginning to make the abstract geometric paintings and films for which she is best known. Her early paintings were cropped views of modern skyscrapers, as seen from street level. Politically, they seemed to question the urban experience, the illusion of corporate transparency, and the individual's relationship to corporate globalism. On an aesthetic level, they challenged the line between abstraction and representation.

A meticulous painter, Morris has developed a time-consuming process of masking and layering paint on stretched canvas. Rather than mixing individual colors with traditional oil paint, she orders domestic high-gloss enamel from a Dutch manufacturer. "I'm obsessive and particular about color choice and quality," she admits, as she displays her extensive collection of color swatches and a few ceramic tile samples she's having fabricated for the Dusseldorf project.

Although her stark imagery suggests isolation, Morris insists that the work is full of people, in the sense that it compels them to view it. As she undoubtedly learned in her post-modern theory classes, the artist must relinquish control to the viewer. The prospect of that inevitable sacrifice may be what moves her to retain such tight command over her work until it is publicly shown. "Ultimately," she says, "the audience completes the work."

See a slideshow of Morris's work and studio here.

• Permanent ceramic tile artwork, from July 9, and an untitled solo show, August 26–September 26. Both at the Gallery Hyundai, Seoul.