In this year's Commencement program, beside the names of 148 graduates were symbols indicating membership in Phi Beta Kappa: a f for those students elected as juniors and a F for those chosen as seniors. Two graduate students were also admitted. Brown's chapter stipulates that fewer than one-sixth of a class can be chosen. The sole criteria are intellectual and moral character. 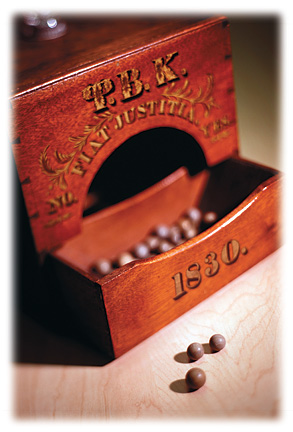 Phi Beta Kappa was created in 1776 at the College of William and Mary; chapters quickly followed at Harvard and Union College. Rhode Island College, as Brown was then known, applied for a chapter in 1789, but Harvard blocked it until 1830, when Rhode Island Alpha was approved. In 1900 this scholarly society created a section for graduates of the Women's College, which merged with the men's in 1969.

In the early days members used the mahogany box pictured at right for elections, voting with small stone balls. (The word ballot derives from the Italian ballotta, or little ball.) Nowadays, each member receives a key-shaped watch fob engraved with the Greek letters F B K and a hand pointing toward three stars.

Until 1832, Phi Beta Kappa was a secret society. Associate Professor of English Stephen Foley, historian of Rhode Island Alpha, says that at their initiation each year, members still learn a secret handshake—one he declined the offer to demonstrate.