The title of director Amir Bar-Lev's latest film, The Tillman Story, which is scheduled for release August 20 is loaded. That word story has many meanings. 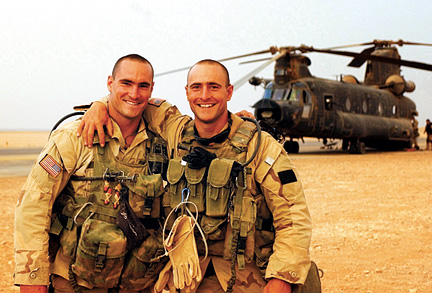 On one level, Bar-Lev's film is a documentary about the former Arizona Cardinals defenseman who enlisted in the U.S. Army in May 2002, became an elite Ranger, and was killed by friendly fire in Afghanistan two years later. On another level, the film's title refers to the heroic myths that grew out of the army's initial lie that he'd been killed by enemy fire while battling the Taliban. Then there's the story of Tillman's family and their determination to learn what all the blacked-out passages in his military files were hiding.

And behind all these stories are the ones societies tell themselves about war. "Soldiers have learned about soldiering through a postmodern hall of mirrors," Bar-Lev says. This generation of soldiers, he argues, sees battle through the fictions of Hollywood movies and video games: "They've learned through stories. And that's what killed Pat Tillman."

It doesn't take long to connect the dots between this idea that stories have the power to kill and Bar-Lev's courses in Brown's Modern Culture and Media department, where symbols and cultural representations are taught to be as powerful as swords. (Bar-Lev was a double concentrator in religious studies and modern culture and media.) And yet Bar-Lev says that while at Brown, he was less interested in theory than in learning how to get a film made. "I was so frustrated," he says. "I wanted to learn the nuts and bolts of production, but the professors were interested in post-structuralist theory."

Bar-Lev's interest in visual media goes back to his high school days in Berkeley, California, when he created elaborate light shows. One of his techniques, which used a special crystallization process for a light filter, was adopted for a Grateful Dead concert while he was at Brown. He also spent a semester during his senior year at the University attending the Prague Film Academy in the Czech Republic.

After graduating from Brown, Bar-Lev found work as a film editor. He soon began making his first documentary, about Jan Weiner, a Jewish professor in Prague who had narrowly escaped death during the Holocaust. That film, Fighter, follows Weiner and his friend Arnost Lustig as they retrace the route that took Weiner to safety. Although the documentary was critically well received, it was released just before September 11, 2001, and was largely ignored by audiences.

Over the next few years Bar-Lev worked in cable TV, at a time when "cable television was on a race to the bottom," he says. Disheartened, he began reading newspapers from cover to cover to find his next documentary subject. The story that caught his attention was that of Marla Olmstead, a four-year-old in Upstate New York who was being hailed as an artistic prodigy. His film My Kid Could Paint That was as much about the meaning of art as it was about how the Olmstead family tried to navigate "the story-telling juggernaut of mass media," Bar-Lev says. At the Sundance Festival in 2007, Sony Pictures Classics bought the film for close to $2 million, but it grossed just over $200,000 in theaters.

Bar-Lev's producing partner, John Battsek, suggested that for his next film Bar-Lev look into Pat Tillman's story. When he sat down with Tillman's mother, Bar-Lev says, "The more she talked about her experience since Pat was killed, the more it resonated: He had died twice, once to death and once to mythology."

The stories we tell ourselves through the media is an overarching theme of Bar-Lev's films. He cuts through the sound bytes to show how, when we get to know the real people behind a story, we see that life is more nuanced and gray than it seems in a thirty-second—or even a 60 Minutes—news clip.

"When you hear about something in the mainstream media, and it sounds like a Hollywood movie, that's a pretty strong indication that there's good documentary material to be had just scratching beneath the surface," Bar-Lev says. "In both My Kid Could Paint That and The Pat Tillman Story, the media served up these easily recognizable characters in order to attract audiences with the promise of an entertaining, easily accessible story: the little girl who reminds adults of their lost innocence, the dutiful citizen who regretfully gives up his safety in order to defend the homeland."

Of course, if stories can veil the truth, and even kill, they should also have the power to do the opposite. Bar-Lev's latest film may not bring a fallen soldier back to life, but it can certainly endow our collective memory of him with greater truth and dignity.