It's human nature to believe things. If we don't have the facts to back up our beliefs, we tend to make them up. This is especially true with statistics. In the new book he coedited, Sex, Drugs, and Body Counts: The Politics of Numbers In Global Crime and Conflict, Watson Institute political scientist Peter Andreas says we are awash in false statistics, all ginned up to draw attention to a cause. 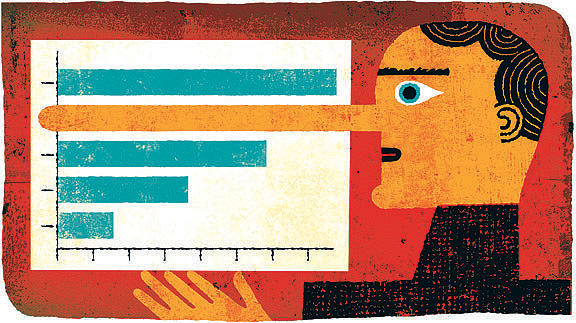 Here are five examples from the book:

THE CLAIM Child pornography on the Internet is a $20-billion-a-year industry.

THE TRUTH The figure first drew attention when it came up during a Congressional hearing and was reported in the New York Times. When asked, a Congressional aide said the number had come from the National Center for Missing and Exploited Children, which said it had gotten it from a New York City consulting firm, which said the source was an international advocacy group, which said the figure originated with the FBI. The FBI said it had never seen the statistic before.

THE CLAIM Drug trafficking is a $500-million-a-year business.

THE TRUTH No one really knows. The United Nations first reported the number in the early 1990s, but an official there later acknowledged methodological problems and admitted to trying to catch the public's attention.

THE TRUTH The Bosnian government announced the number during the war with little evidence to back up its claim. The most reliable study to date shows actual number of dead is closer to 100,000.

THE CLAIM Identity theft costs its victims $48 billion a year.

THE TRUTH If this were true, it would mean that the banking industry loses half its annual profits.

THE CLAIM Up to 800,000 people are trafficked across borders every year against their will.

THE TRUTH The U.S. State Department came up with this widely cited number, but the Government Accountability Office, the investigative arm of Congress, has questioned its validity.