Give Me an A

Ethnomusicologist Kiri Miller, the Manning Assistant Professor of Music, studies the interaction between music and culture. Her latest research looks at the music of video games, including Guitar Hero, Rock Band, and Grand Theft Auto. She is writing a book on the subject, Playing Along: Digital Games, YouTube, and Virtual Performance, to be published by Oxford University Press. 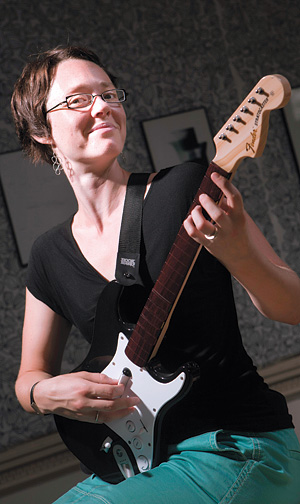 BAM You also say the games promote a deeper appreciation of music.

MILLER I think there's no question about that. People have described being inspired to listen to music in different ways, to listen analytically, to listen for the guitar part, and of course, there are people who have been inspired to learn about composition or to learn the actual instrument.

BAM But how can pushing buttons on a plastic guitar connected to a video game console be a creative act?

BAM Do you imagine a time when we'll have the same regard for virtuoso Guitar Hero players as for virtuoso musicians?

MILLER There's every reason to give people credit for putting their time and talent into this activity. Instead of thinking about whether it would be better to play real guitar or Guitar Hero, think about the difference between Guitar Hero and just listening to a piece of music. Which one of those is more musically involving?

BAM You have a PhD in musicology, you can play several instruments, and you sing. What was your experience with these games like?

MILLER I've reached an advanced-intermediate skill level. It's a blast to play.

Reader Responses to Give Me an A