What's it like to be a black student at Brown? In late September, the Inman Page Black Alumni Council (IBC) held a weekend campus reunion that featured an address by President Simmons, a variety of social gatherings, and panels on topics ranging from race in the age of Obama to inequities in America's prison system. Several hundred alumni made the trip to Providence, some from classes as far back as the 1950s. 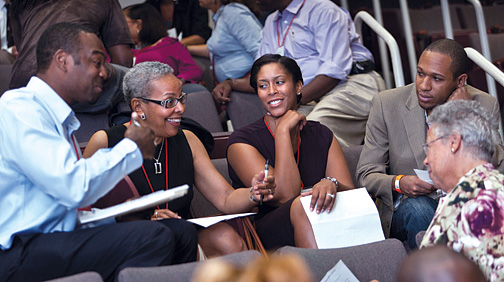 Scott Kingsley
Discussing racial identity, from left, Karl Lozanne '95 and Lisa Holden-Pitt '75; Karls's wife, Brittany Lozanne; and Jamal Hill '11.
One of the most interesting discussions, "Intergenerational Perspectives on Being Black at Brown," focused on the changing nature of the black experience on campus. Alumni were asked to break into small groups and share their experiences of life on College Hill. What emerged was a nuanced view that varied from generation to generation.

In the discussion and in follow-up interviews, here's what two alumni and a current student said:

"We were pretty singular in voice. You didn't hear a whole lot of dissension. We were really brought together around a cause.... In the early seventies, a substantial core of the black students at Brown were from inner-city environments, and had this new experience of being in the type of setting that Brown provided. For some of the tougher courses, black upperclassmen would conduct study sessions for the younger students just starting out. It may have been a sense of responsibility—maybe that's too strong a word—to help each other. It certainly wasn't anything that was imposed.

"Just a while ago, I heard someone use the phrase 'giving the nod.' I knew exactly what he meant. Say if I saw another black person walking in my direction—we'd give a subtle nod, a gesture of acknowledgment. It kind of reveals a sense of community or solidarity. It's like we're saying 'hi,' as if we were family, as if we knew each other."

"There were a lot of people with significant descent: first- or second-generation students from parents who had emigrated from the Caribbean or an African country. That was just beginning to happen.... For our generation, racism, though present, was not in our face. [The Rodney King trial and its aftermath] gave us a visible, palpable feeling of a wrong. It encouraged feelings in us that I imagine were encouraged in people in the 1950s and 1960s, [when they] viewed images of people getting beaten on the street or being attacked by dogs. It just made us more united. We were just more mindful of race...

"The unity was there—we were always united—but this brought us even closer. It made us feel more protective of everybody else that was walking around campus that looked like us."

"Here, you really find diversity in terms of the experience of growing up black in America. Some people's parents actually grew up in the South and faced segregation, where others' parents came from the Caribbean, Africa, or elsewhere.... It definitely splinters it.

"Take the Obama campaign, for instance. I just don't know how important it was among black students who weren't from here. I don't know if they understood the true significance of it. Perhaps they did, but that's my main point, we don't really have these types of discussions about what it was like growing up black for you here as opposed to someone like me, whose roots in this country go back hundreds of years.... Overall there's unity in that we appreciate the diversity of our experiences. But I don't think we really take the time to understand each other's background. I don't think we take the time to come together.... We've advanced so far as a people that we don't really see a cause to fight for."

Reader Responses to Perspectives on Race