President Bill Clinton once called him "the unofficial ambassador of America's music." Charles Ansbacher, the founder and conductor of the Boston Landmarks Orchestra, may have been a talented musician and a well-known orchestral conductor, but his real passion was evangelical: he worked tirelessly to disabuse the public of the idea that orchestral music was elitist, that it had nothing to say to them. 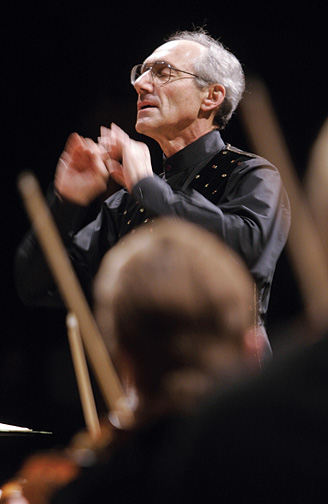 Courtesy Landmarks Orchestra
Ansbacher conducting the Boston Landmarks Orchestra.
Diagnosed with an inoperable brain tumor in the summer of 2009, Ansbacher nevertheless spread music to an additional 100,000 people during the last year of his life: conducting the first-ever symphony concert at Boston's Fenway Park in July and a series of Beethoven performances on Boston's Charles River Esplanade throughout the summer season. And he continued to travel, becoming the first American to lead the Vietnam National Symphony in Hanoi, and making music in Bosnia, Lebanon, and Moldova until he died on September 12 at his home in Cambridge, Massachusetts. He was 67.

Ansbacher, the son of two prominent Adlerian psychologists, was born in Providence, Rhode Island, in 1942. He discovered the cello during a family trip to Germany when he was 13. During high school his musical talent emerged in tandem with his leadership ability: he became both his class president and the organizer of a chamber music group.

"I remember countless times coming home to find him practicing the cello or playing with the chamber music group," his brother Max wrote on the Boston Landmarks Orchestra website shortly after Ansbacher's death. "He was also an excellent skier and could probably have made the varsity football team, but he decided instead to make music his principal avocation. At his high school graduation he was the first student ever to be given the honor of conducting the orchestra, which had always been done by the music teacher."

Ansbacher entered Brown as a physics major, but music beckoned. He founded and directed the Brown University Chamber Soloists—they were known for performing Bach's Brandenburg concertos in dormitory lounges—and studied with conductor Erich Kunzel '60 AM, who taught music and performance. (David Gockley '65, who directs the San Francisco Opera, was another Kunzel student.) After graduating, Ansbacher followed Kunzel to Cincinnati, working a year for him after Kunzel became associate conductor of the Cincinnati Orchestra. Like his Brown mentor, who became a renowned Pops conductor, Ansbacher aspired to make music as widely available as possible.

In 1970, Ansbacher became conductor and music director of the Colorado Springs Symphony Orchestra, a position he held until 1989. In Colorado Springs he described himself as a "practical idealist" and wove the orchestra's music into the community's fabric, arranging free public concerts and pioneering the television broadcast of orchestral music.

"His life's mission," wrote Phil Kendall, former president of the Colorado Springs Symphony Board, after Ansbacher's death, "of bringing free orchestral music to diverse audiences began when he helped inspire the summer symphonies in the parks in Colorado Springs, where tens of thousands attended every summer, many experiencing orchestral music for the first time." Ansbacher also managed to earn a PhD from the University of Cincinnati in 1979 and to conduct widely around the United States, Europe, and Asia.

In 1976 he became the first artist to spend a year as a White House Fellow, serving as a special assistant to two transportation secretaries and cochairing a task force on the use of design, art, and architecture in transportation. The experience would serve him well when in 1988 the Colorado governor asked him to direct the New Airport Art Program at the brand new Denver International Airport. Under his leadership, the airport incorporated thirty arts projects into the architecture, landscape, and interior design of the airport. At the time the $7.5 million program was believed to be the largest public art project in forty years. 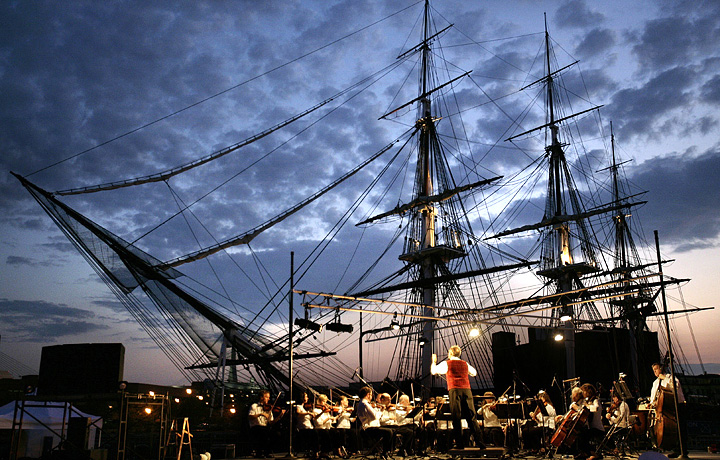 Ansbacher leads the orchestra at the Charlestown Naval Yard against the backdrop of the USS Constitution.

In 1990, when he returned to Brown for his 25th reunion, he was a guest conductor of the Pops concert on Commencement weekend. That year he also became an administrator and frequent guest conductor with the Colorado Symphony Orchestra, then moved in 1993 with his family to Vienna after President Clinton appointed his wife, Swanee Hunt, the daughter of oil baron H.L. Hunt, the U.S ambassador to Austria. He found himself "underemployed," he told the BAM in 2003, but he found his way, working part-time for the Vienna State Opera and the Vienna Chamber Orchestra. During the Balkan War, he traveled to Bosnia to conduct the Sarajevo Philharmonic. He found the orchestra rehearsing in the unheated National Theatre; when the power failed musicians pulled out their cigarette lighters to light the room. "I remember going on stage," he told the BAM, "and someone had put a sign seriously on the curtain that said 'No weapons on stage.'"

When, in 1997, Hunt was recruited to lead the Center for Women and Public Policy at Harvard's John F. Kennedy School of Government, Ansbacher followed. Troubled by a lack of free classical music in Boston and too little music outdoors during the summer, in 2001 he founded the Boston Landmarks Orchestra to bring classical music to where it was seldom heard. The group's motto was simple: "Free Concerts for All." By the time he died, Ansbacher and his orchestra had performed before half a million people. In October, the Boston Landmarks Orchestra performed two memorial concerts to honor him and announced that the 2011 season will be the Charles Ansbacher Legacy Season.

When the orchestra invited people to share memories of Ansbacher on its website this fall, people from as far away as India and South Africa responded. One woman described overhearing someone say how annoying it was when people applauded at the wrong times during a concert. "Oh, no," Ansbacher replied. "I love when that happens. It means there are people in the audience listening to live classical music for the very first time."

In addition to his wife, Ansbacher is survived by three brothers; two sons, Henry Ansbacher and Theodore Ansbacher-Hunt; a daughter, Lillian Shuff; and three grandchildren.

Read more about Ansbacher and see videos of him at www.landmarksorchestra.org.

Reader Responses to Music for Everyone