Real Estate with a Conscience

Suzanne Sunshine's mother, Louise, was all about luxury. She worked as one of Donald Trump's first employees and then broke out on her own to build an $8 billion business marketing high-end condos. Her company, the Sunshine Group, used the motto "All Square Feet Are Not Created Equal." Louise also coined the phrase "Five-Star Living," and in 2008, Lifestyles magazine dubbed her the "queen of luxury." 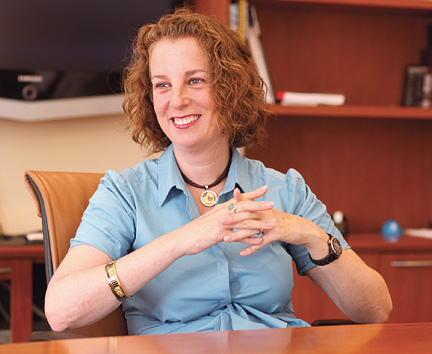 Michelle V. Agins/The New York Times/Redux
Suzanne Sunshine also works in a niche real estate market, but her clients are all nonprofit organizations. Her firm, S. Sunshine & Associates, has found properties for Atlantic Philanthropies, Planned Parenthood, and the Andrew Mellon Foundation, among others. Sunshine also gives 10 to 50 percent of her commissions back to the client or an associated nonprofit.

Sunshine credits her philanthropic bent to the influence of her father, Abraham Sunshine, whom she describes as "an outstanding physician and inventor." Abraham, who separated from Louise in the mid-1970s, researched pain relief, for which he developed patented formulas for over-the-counter medications. As a girl, Sunshine attended house calls and went on hospital rounds with him. "I learned," she says, "that helping people was a very important part of life."

After graduating with a degree in international relations, Sunshine worked for a series of nonprofits and foundations in New York City. She raised money for Equitable Real Estate, which supports low-income housing, and later for the Local Initiatives Support Corporation, which tries to bring supermarkets into the inner city.

After 9/11, Sunshine decided she wanted to spend more time with her two children. Running her own business would give her more flexibility, and so she opened S. Sunshine and Associates.

"Nonprofits hire me not because I'm giving back to them," she says. "They hire me because I can provide the highest level of real estate service. They feel connected to me because I've devoted my life to working for nonprofits."

In just the past year, Sunshine has closed more than a dozen significant real estate deals involving at least 150,000 square feet of nonprofit space, most notably a 26,000-square-foot sublease for Atlantic Philanthropies. This year, New York State designated S. Sunshine & Associates as a notable woman-owned enterprise.

Though she attributes her combination of professionalism and philanthropy to her parents, Suzanne says she also draws inspiration from the art world. "Abstract expressionism, in particular, combines different elements—spiritual realism with geometric abstraction," she says, "That was a coming together of forces, and I think for me with Sunshine Associates, I combine my social conscience and passion with a specific, well-structured, mathematical analytical skill set."

Reader Responses to Real Estate with a Conscience