Rooms with a View

On a sunny fall afternoon, Faunce House is hopping. Sprawled on armchairs and couches in the airy new Stephen Robert '62 Campus Center, Brown students chatter away. In the welcome center, high school students and their parents check e-mail at public computers. They're waiting for the scheduled admission tours that now start under Faunce Arch, which is accessible from the campus center through doors set in a new wall of glass. The century-old Faunce House was closed for renovations last year, and it reopened in September just in time for the return of students to campus. Now, designing a student hangout can be a risky business; however smart the architecture, until students swarm in, all bets are off. Fortunately, the Robert Center seems to be a huge success. Even though it's not quite finished, it has quickly become the campus hub. Students seem to genuinely enjoy being there: on weekdays, weeknights, and all weekend long, they throng in, laughing and studying, playing pool and eating sushi, catching up with friends on the airy main level or catching a nap in one of the quieter spots upstairs. 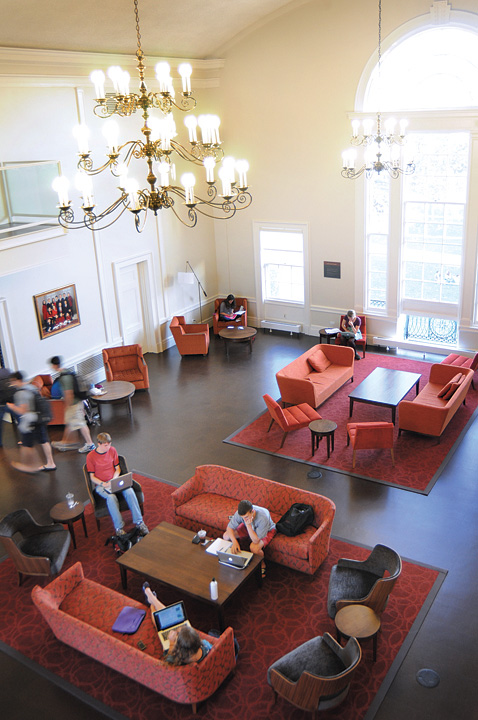 Let's face it: the old Blue Room just wasn't cutting it anymore. Or, perhaps more accurately, it just wasn't enough. Especially with the ubiquity of laptops and wireless Internet connections, many students these days prefer to work in cafés and other public places surrounded by their peers. Perhaps acknowledging as much, President Simmons made sure that a key priority in the Plan for Academic Enrichment was creating a new campus center. That priority became a reality when Stephen Robert '62, stepping down from his position as chancellor, gave the lead gift to make it happen. His goal, he says, was to create a convening place, a center, for the campus: a place "for people who wandered onto the campus," and "for students to party, to eat, to socialize."

Robert is following a long tradition. The original structure, known as Rockefeller Hall, was built in 1904 with a gift from John D. Rockefeller Jr., class of 1897, to serve the social and religious needs of Brown's 681 students. Designed by McKim, Mead, and White—who had just finished the Rhode Island State House—the building boasted the architectural must-haves of the day: trophy room, smoking lounge, billiards room, lunch counter, and barbershop. Upstairs were meeting rooms and offices for the YMCA and student publications.

In 1930 the student body had doubled, and Rockefeller donated an additional $600,000 for an addition connected by a brick arch. The new wing contained a 360-seat theater, a dining room, and a tavern-style grill. At Rockefeller's request, both the new building and the old were named Faunce House, after Brown's ninth president, William H.P. Faunce, class of 1889.

In 1939, Brown men began to entertain their dates in the brand-new Blue Room, which featured a soda fountain and upholstered armchairs. President Henry Wriston, who was in Europe during construction, returned to proclaim it "the boldest experiment I have ever seen."

Faunce House received another face-lift in 1980, when the Blue Room moved to space formerly occupied by a newsstand and by the sitting area known as the Airport Lounge. The grand second-floor hall then used by Production Workshop as a black-box student theater space was restoredt o its former grandeur as the Leung Gallery. 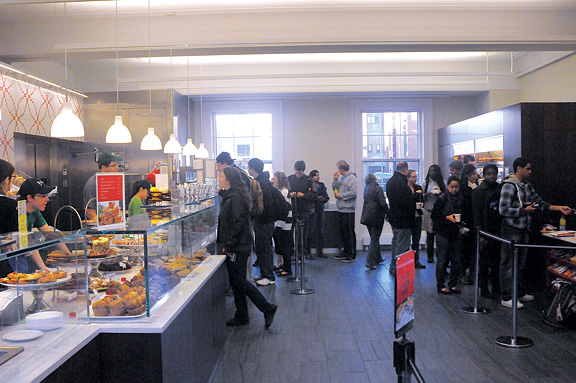 The lunch crowd gathers in the new Blue Room for sandwiches and pastries.

This latest renovation is more ambitious than any since the Rockefeller-funded projects. On a recent tour of the building, Ricky Gresh, who as senior director of campus life for student engagement chaired the committee overseeing the project, explained that one of the main goals was to make the building more transparent and inviting.

"Before, people experienced Faunce House as a lot of closed doors," he says. Schwartz/Silver Architects, of Boston, restored and retained the building's basic framework in order not to preclude future renovations, but they opened up its core, creating a more welcoming and social space. The Robert Center now has a clear (literally; it's glass) entrance from Faunce Arch, and approaching the information desk you can see all the way through to the Blue Room Cafe (no longer blue) at the far end.

Expanding food options was another high priority, and the Blue Room's hours and offerings have been extended. Weekdays, doors open at 7 a.m. to a selection of pastries from local bakeries, and students can use their meal credits into the evening, when they can buy hot meals, including Indian food made at a nearby restaurant. "It's wonderful to see the Blue Room so full and cheerful," says Robert, adding that he'salready heard complaints about long food lines. Then again, he says sanguinely, "nobody wants to go to a restaurant with fifty tables and only two occupied." 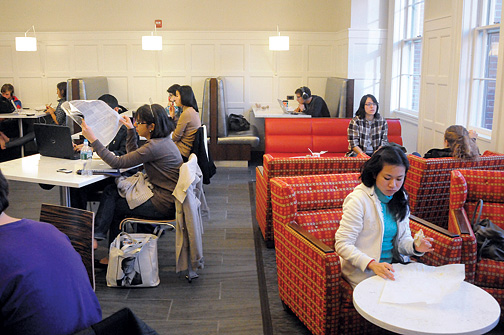 Another goal was to add informal meeting spaces open to the entire community. The College Green is Brown's central gathering spot, and the porch and steps of Faunce House are an extension of that space, Gresh observes. The first floor of the Robert Center now extends it still further with booths and tables outside the Blue Room and couches and armchairs throughout.

When students started to use the building, they immediately established norms, Gresh says. The first floor is social, the place to meet and eat. Upstairs, Petteruti Lounge has new audio and video equipment, making it handy for all kinds of meetings. The Leung Family Gallery is furnished with couches and coffee tables where students can use their laptops. There, an informal code of silence—or at least quiet—has already emerged. On a recent visit, says Robert, "I was thrilled to see every seat in Leung taken. The students all looked so comfortable, sitting in cozy chairs with their laptops, in that beautiful light." Just a few doors down the hall are the Student Activities Office and the Curricular Resource Center, making one-stop-shopping easy for students planning their academic and extra curricular lives.

The third floor of the Robert Center houses meeting spaces and offices for student groups as well as a home base with lockers for Resumed Undergraduate Education students and for graduate students who commute to campus. A transparent mezzanine connects the two ends of the building through the Leung Family Gallery.

In the basement, the Underground is still used for parties, open-mike nights, and other events, and pool tables are next to the Campus Market, which sells snacks and sundries. Foosball tables are coming, Gresh promises. Down the hall, the Kasper Multipurpose Room provides a huge flexible space that can handle parties of nearly 500 people or can be reconfigured for lectures, banquets, fashion shows—whatever students want to plan. There's tons of storage for chairs and tables, Gresh points out, and around the corner students can borrow bicycles and camping equipment. The days of the smoking lounge and trophy room are gone.

Robert says he's proud to have his name on the new campus center."When I arrived at Brown as a freshman, the first thing we did was go to Faunce House to get our keys," he recalls. "It was where I picked up my mail everyday, where I read the BDH."As a trustee, he says, "I held most of my meetings in the Blue Room. As chancellor, I had an office over on Benevolent Street, but I went back to having meetings in the Blue Room. I liked to be around students."

Reader Responses to Rooms with a View