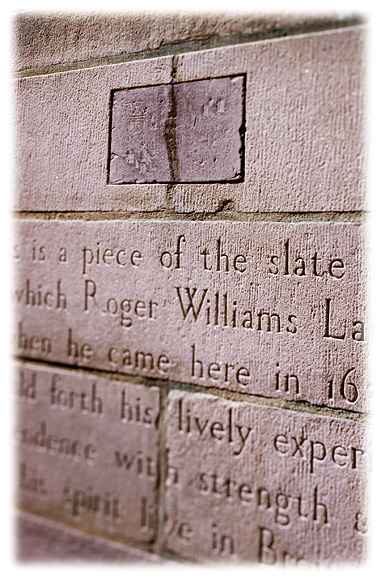 If you go around to the back of the Brown Bear statue on the College Green, you will see a single slate brick set into its base. Covered with scraggly scratch marks, it doesn't look like much. In fact, although the front of the statue is one of the most photographed backdrops on campus, few people bother going behind it.

The brick is actually from the rock where theologian Roger Williams alit from his canoe in 1636 onto land he'd bought from the Narragansett Indians, establishing a settlement called Providence. The slate was embedded into the base of the statue when it was first erected in 1923.

As the inscription beneath the rock notes, Williams began the settlement "to hold forth his lively experiment of independence and strength and courage." He was the first American to advocate for the separation of church and state and argued that all citizens should be able to follow their own consciences when it came to religion. For this, he was tried and convicted of sedition and heresy. (Pembroke Hall is named in his honor, after the college he attended at Cambridge University in England.)

"May [Williams'] spirit live in Brown men," states the text below the rock on the statue. Presumably if Williams were around today, he'd include women in that wish, too.

Reader Responses to Upon This Rock