"Who knew that four people at a kitchen table could give rise to a movement that has offices in forty countries?" Dorothy Rabinowitz Stowe '42 asked shortly before she died July 23 at the age of eighty-nine. "You couldn't possibly have predicted it." 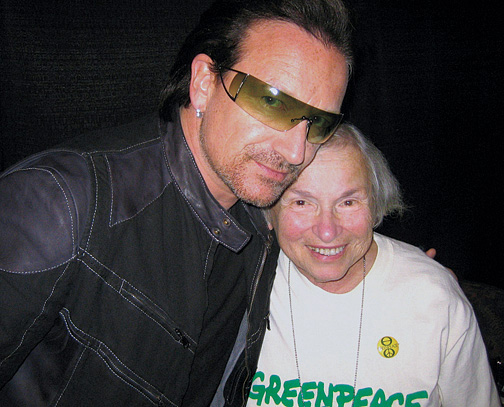 Stowe and her husband, Irving Strasmich Stowe '36, were among the founders of Greenpeace, which began in 1970 when the two couples at that kitchen table formed the Don't Make a Wave committee to stop a nuclear-weapons test at the Aleutian island of Amchitka. Later, while trying to think of a catchier name for the group, cofounder Jim Bohlen saw someone flash them a peace sign as they were leaving a church basement. One of the group's members noted that their protest could be seen as an attempt to establish a "green peace." Greenpeace was born. (Irving Stowe never lived to see the group's great success: he died in 1974 of stomach cancer.)

Dorothy, who was born December 22, 1920, in Providence, became a psychiatric social worker in Rhode Island after graduating from Brown. Shortly after organizing a local chapter of the American Federation of State, County and Municipal Employees for Rhode Island social workers, she threatened a strike for better pay. The governor called her a communist, but she prevailed, winning a 33 percent pay raise for her union members.

She met Irving, a labor lawyer, shortly afterward, and the couple married in 1953; jazz pianist George Shearing was best man at their wedding. "They not only married each other," their daughter, Barbara Stowe, told Canada's Globe & Mail newspaper. "They married activism." The couple spent their wedding night at a NAACP banquet. They became Quakers and took the surname Stowe as a tribute to abolitionist and novelist Harriet Beecher Stowe.

After the couple moved to Vancouver in 1963, Irving, who was unable to practice law in Canada, became immersed in antinuclear and environmental causes while Dorothy worked to support the family. In 1967, they met Jim Bohlen and his wife, Marie, at a peace march. In 1970, the four of them heard about an upcoming nuclear-weapons test at Amchitka. In true Quaker fashion, they decided to send a ship to the testing site to bear witness. Irving organized a benefit concert featuring Joni Mitchell, James Taylor, and Phil Ochs to raise money for the trip. The U.S. Coast Guard stopped the ship before it could get to Amchitka, but by then Greenpeace had become widely known.

The Stowes' home became Greenpeace's unofficial headquarters. Dorothy, says Rex Weyler, another early activist with the group, "wasn't the person who was out in front and visible, but she was doing a lot of the work behind the scenes. Often they were working on a dozen campaigns: the rivers, the highway, the oil tankers, all those things, and she had all that stuff organized and filed."

Dorothy persevered long after Irving's death. She oversaw the marriage of gay and lesbian couples and helped establish the city's first freestanding abortion clinic. She retired from social work in 1985. "She was just a lifelong activist for social justice, the environment, and peace," Weyler says. "A lot of people think it's for young people in their twenties. It was really inspiring for me to see Dorothy in her seventies and eighties so actively involved."

In later years, battling heart failure, kidney disease, leukemia, and diabetes, she volunteered at the Vancouver General Hospital palliative care unit, refusing treatment, Barbara Stowe says, "when faced with the prospect of growing infirmity." By then she was famous. The singer Bono invited Dorothy to a 2005 U2 concert in Vancouver, dedicating the performance of "Original of the Species" to her onstage.

About a month before she died, she hosted a brunch at home for Kumi Naidoo, Greenpeace's incoming international executive director. "There she was," Weyler recalls, "standing up in the kitchen, making brunch for everybody. She was so tiny and frail—she had lost quite a bit of weight by that time. It looked to me like she could barely stand up. [But] that was her thing; that was her way. She was a worker."

"The most fitting memorial for Dorothy Stowe," Rex Weyler wrote on the Greenpeace website shortly after her death, "is that we all get up each morning and go back to work in the service of peace, justice, and the living Earth."

She is survived by a son, Robert, and a daughter, Barbara.

See a brief clip of Bono's meeting with Stowe here.

Portions of this article are adapted from an obituary in the Vancouver Sun.

Reader Responses to Who Knew?