"It all comes from a longstanding interest in printing—especially the letterpress," says industrial designer John Feidelson ’78, who makes small wooden boxes and picture frames wrapped in foil that he imprints with simple patterns. When he was thirteen he became entranced by the letterpress at his summer camp, so much so that his parents later gave him his own three-by-five-inch Kelsey Press. 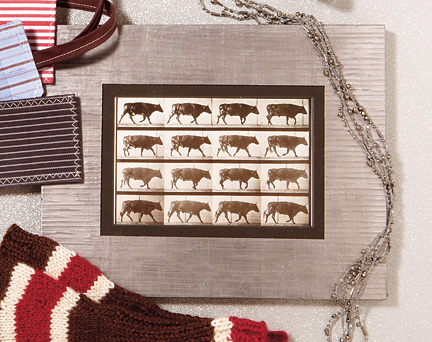 At his alternative public high school, Feidelson studied the history of printing, and he followed that at Brown with an independent concentration in Theory and Design, sponsored by architectural historian William Jordy and sculptor Richard Fishman.

"I was more involved in the craft than the theory of sculpture," Feidelson says, noting that Fishman worked with both metal foils and wood—the same materials Feidelson now uses. He crafts walnut and maple with such hand tools as a guillotine cutter and a miter box. He wraps those frames with copper or lead foil, which he imprints with deceptively simple patterns that he fashions from the lead rule printers use to affix handset type. To cut and fit the rule, he uses a traditional printer's miterer developed in the nineteenth century.

After Brown, Feidelson studied industrial design. "I've always worked at architecture firms .... as the token industrial designer," he says, billing himself as the go-to guy for solving problems. He's now a senior associate principal at ADD in Boston. "I try to do something different in every project," he says, "something I've never done before."

That urge to innovate is apparent in his work. Foil frames float on top of glass, attached to the wooden backing by super-strong neodymium magnets so images can be swapped out on the slightest whim. It couldn't be simpler, or smarter.