Women on the Verge of a Nervous Breakdown, music and lyrics by David Yazbek '82 (through January 23 at Lincoln Center's Belasco Theater, New York City). 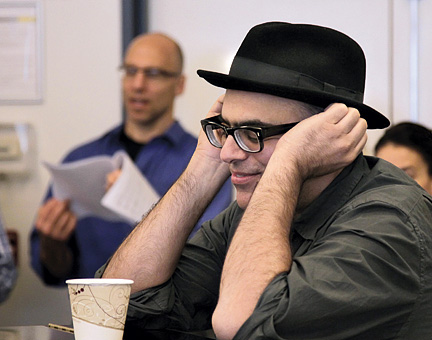 Photos by Paul Kolnik/ Lincoln Center Theater
Songwriter David Yazbek in rehearsal.
When David Yazbek sat down to write the songs for Women on the Verge of a Nervous Breakdown, he set two goals for himself. Number one, he says, was "for it not to suck." Number two was "for it not to sound like cultural tourism, musically. I tried to stay away from anything that smelled like a cliché."

The show, which is based on the 1988 Pedro Almodóvar film, eschews most musical references to Spain, save the occasional subtle flamenco-style guitar. (When the orchestra's percussionist arrived at the first rehearsal excited about the new castanets he had just bought, Yazbek told him, "Dude, you're going to have to return them.") But it does beautifully capture the feel of the film: Women on the Verge is somehow both deeply intelligent and frankly raunchy; clever puns and rhymes blend seamlessly with emotional insights. This mix of the absurd and the tragic, the poignantly true-to-life and the bizarre, is disarming—perhaps an appropriate adjective for a show whose climax involves a terrorist, a madwoman, and a handgun.

The plot centers on overlapping love polygons. At the play's outset, the womanizing cad Ivan announces on his lover Pepa's answering machine that he's leaving. His ex-wife, Lucia, played by Patty LuPone, who plunged into insanity after Ivan's betrayal, is out of the hospital and bent on revenge. Their son, Carlos, hasn't told his mother that he and his girlfriend, Marisa, are looking for an apartment together. And Pepa's best friend, Candela, has taken up with a man named Malik, who's "swarthy like a desert sheik," she tells Pepa in one of the play's funniest songs. "You wouldn't believe the connection we had, like immediately," she says. "I was ready for him to meet my mom. I could feel my heart exploding like some kind of bomb—which is ironic," she sings, since she's beginning to get nervous about the gun belt and grenades he's been leaving around her apartment.

These worlds collide when Carlos and Marisa come to see Ivan and Pepa's penthouse at the same time that Candela comes frantically knocking. The police show up, everyone unwittingly eats Pepa's Valium-laced gazpacho, and Pepa, Ivan, Lucia, and Malik pursue a fateful (and fatal) resolution.

And that's just one part of the story.

yazbek started his career as a comedy writer for Late Night With David Letterman and attracted an indie following as a singer-songwriter. He struck gold with his first foray onto Broadway: his score for the 2000 musical of The Full Monty was nominated for a Tony and won a Drama Desk Award for outstanding music. Then in 2005 his music and lyrics for Dirty Rotten Scoundrels were again nominated for a Tony and several Drama Desk Awards. But when Jeffrey Lane, his collaborator on Scoundrels, approached him about doing Women on the Verge, Yazbek at first said no. 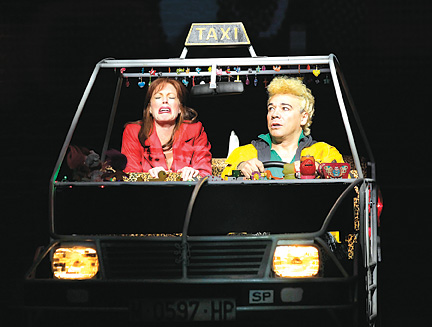 Sherie Rene Scott plays the distraught Pepa, and Danny Burstein is a cabbie in the production.

"I love Almodóvar," Yazbek explains, "but I said, 'I don't get how we do it. The other shows are very clear-cut. The Full Monty is a sports story: there's a problem, we put the team together, and we win. Scoundrels is this very clearly plotted con-game story. This one, if you look at the movie, you say, what the hell was that?'" Then there was the gender problem. "This is a show almost entirely about women," Yazbek says, "and I am not a woman, nor am I a drama queen, nor am I gay like Pedro or like everyone else I work with all the time."

Even after Lane talked him into the job, Yazbek was concerned about his ability to "access the emotional intensity that's underneath everything [Almodóvar] does, including his comedy." Lucia's character, in particular, was a challenge. How do you help the audience connect with a homicidal crazy woman?

He had a breakthrough when Lane proposed a name for Lucia's signature number: "Invisible." "The title 'Invisible' led me to all kinds of stuff," Yazbek says. "Justifying the loss of your relationship, the loss of your family—it couldn't be gone forever. It's just invisible. It's just a magic trick. The boys always used to look at her. The boys don't look at her anymore. She can do the trick, too—she must be invisible."

It wasn't until he heard LuPone perform the song that Yazbek believed he'd achieved his first goal: it didn't suck. The song comes in an austere scene with a single spotlight on Lucia. In the song, Yazbek says, "she tells the entire story of her life going crazy, the story of her entrance into insanity, but also her entrance into middle age. Which is sort of the same thing, in some cases. That's when you get every woman over a certain age in the audience: there's a little bit of a gasp, and then there are tears. After a career of going for the laughs most of the time, going for the tears is very satisfying."

Reader Responses to Going for Tears