At his inauguration as Rhode Island attorney general in January 2003, Patrick Lynch '87 felt a tug at his pants from his five-year-old son, Graham. Lynch leaned his six-foot, five-inch frame down to hear his son whisper to him, "Dad, remember—with great power comes great responsibility." 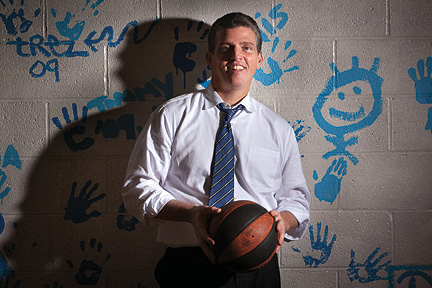 Scott Kingsley
Outgoing Rhode Island attorney general Patrick Lynch '87 has a new job helping kids around the world use sports to prepare for everything life throws their way.

The precocious Graham was quoting the famous Stan Lee line from the hit Spider Man movie of 2002. It was a quote that Lynch would hang as a reminder in his office during his eight years as attorney general. By the time term limits required him to step down in January, Lynch had been responsible for more than 16,000 criminal cases each year in the state. He'd also overseen the investigation and prosecution of the fourth-deadliest nightclub fire in U.S. history, the Station fire, which occurred only forty days after Lynch had taken office, killing 100 people and injuring about 230 more.

What's less known about Lynch is his career as a professional athlete. At Brown, Lynch was a key member of the 1986 Ivy championship team, which earned the school's only men's basketball Ivy title. That year the Bears ended a long string of domination by Penn and Princeton by beating Penn at the Palestra, 76–72, its first win in Philadelphia since the 1958–59 season. In his attorney general's office, Lynch kept a photo of himself taking a free throw at the Palestra as streamers rain down from the stands. The experience of being a member of that team, he says, helped to focus his approach after college. "Sports teaches you focus and determination," he says. "It teaches you about teamwork."

After graduation Lynch played professional basketball in Ireland for two years before returning to the United States to earn his law degree from Suffolk University Law School. He then returned to Dublin for another year to compete during the 1992–93 season. More significant than his play on the basketball court, however, was the opportunity in Ireland to become involved with the Institute for International Sport and its SportsCorps and Belfast United Programs. Among other things, Lynch helped create youth teams that included an equal number of Catholic and Protestant kids. The players would practice together for several months, play competitive games in Northern Ireland, and then enjoy an all-expense-paid trip to the United States.

"He did a magnificent job," says the institute's executive director, Dan Doyle, who worked closely with Lynch at the time. "It was a very difficult time to do that kind of work in Northern Ireland. Peace had not yet been declared. He showed some remarkable leadership qualities at an early age." Lynch worked with hundreds of Catholic and Protestant kids. The program was so successful that when the 1995 peace accord was signed, President Bill Clinton and several Northern Ireland political leaders noted the program's success in helping show the way. 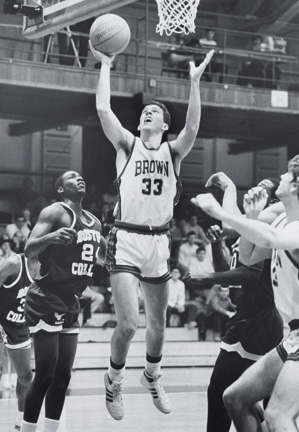 In his new role, Lynch will help market and promote the peace summit, traveling, raising money and generally reaching out to government leaders in the United States and abroad to bring as much attention to the summit as possible. He will also serve as its official spokesman. "The timing was a great coincidence," Lynch says. "I was concluding my service. Dan Doyle wanted me to take on a greater role, and at the same time continue to work on something that I care very deeply about and get very excited about."

The World Youth Peace Summit promotes the ideals of international peace and goodwill through sport. And there is no better missionary for the ability of sports to shape kids into caring citizens than Patrick Lynch. As attorney general, he frequently spoke about sports in Rhode Island classrooms. "Sports ultimately aren't about winning and losing," he says. "They're about the lessons you take away from them regardless of the score at the end of the game. There are so many life lessons in sports that I think translate and carry over."

Reader Responses to A Sporting Chance