Sometime during World War II, Joseph Jagolinzer stumbled across a greeting card filigreed with bits of cancelled postage stamps. Jagolinzer, a Cranston, Rhode Island, furniture salesman who died in 1983, had long dabbled in visual arts, and those bits of stamps inspired him to create a new medium. For the rest of his life, he created portraits and landscapes from pieces of cancelled stamps. 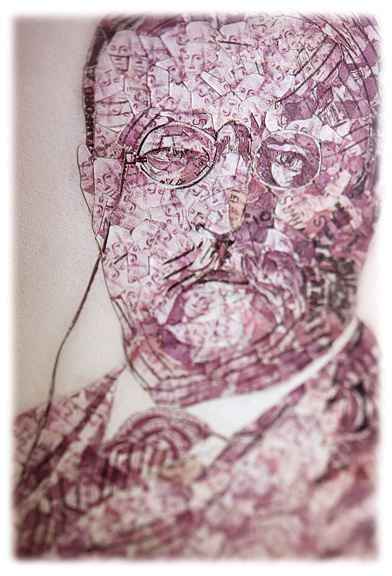 The work was painstakingly slow. He had to cut up hundreds of stamps and arrange them in the right patterns, says Jagolinzer's nephew, Burt, who learned from Joseph how to create the collages. He still makes them today.

This portrait of Teddy Roosevelt was part of a series Joseph completed of every American president. Burt says that all of his uncle's friends and family got into the habit of clipping the postage off their mail and storing the stamps until Joseph could stop by to collect them.

Look closely and you'll see that each stamp is a portrait of George Washington. Green cancellation markings make up the waves in Roosevelt's hair, the whiskers of his mustache, and suit striping.

Although Joseph Jagolinzer was a RISD graduate, his nieces Marion Jagolinzer Goldsmith '43 and Lois Jagolinzer Fain '49 and his son Stanley '40 earned degrees from Brown. The Roosevelt portrait, a gift Joseph left to Brown, can now be found in the John Hay archives.