A Geek in the Kitchen

If you wanted to eat well as a student but could only afford a cheap bottle of wine, Jeff Potter '00 was the guy you wanted around. A computer science and visual art concentrator, Potter has the heart of an innovator and the wallet of an improviser. As an upperclassman he spent many nights bringing the scientific method to the kitchen. "I'd try to see if salmon and spaghetti could go together," he says. 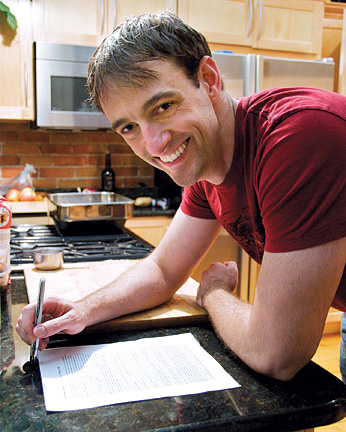 Shimon Rura
Potter's cooking approach combines science with fun.
These days Potter writes code and consults for high-tech start-ups, but judging from his new cookbook, Cooking for Geeks: Real Science, Great Hacks, and Good Food, his culinary research is alive and well. As a cookbook for the scientifically minded—he explains protein denaturation, how to calibrate your oven using sugar, how to make an ice-cream machine from Legos, and how to cook fish in a dishwasher—Cooking for Geeks has been a bit of a blockbuster. It has been first in the Amazon.com subcategory General & Reference, second in Food Science, and third in Culinary Arts & Techniques. Potter has been featured on the Today show, NPR's Science Friday, and other news programs. The Washington Post called the book "a rock-and-roll version of Harold McGee's On Food and Cooking," referring to McGee's bible of food science.

Researching Cooking for Geeks was like self-directed graduate study, Potter says, but the book doesn't read that way. He makes food chemistry fun. Nailing the perfect holiday roast or Fourth of July barbecue isn't the point, Potter says. In a way, his approach is a return to the messier, more spontaneous one epitomized by the likes of Julia Child. Potter, for example, encourages novices to break free of a rigid adherence to recipes and to try new techniques. At the same time, Cooking for Geeks exhibits a scientist's love of technology and basic chemical processes. "I wrote it," Potter says, "for someone like me." 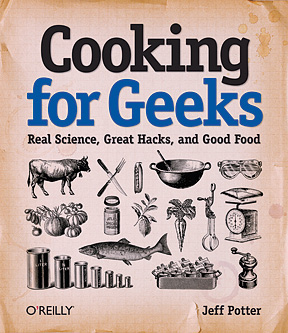 Cooking for Geeks has broader ambitions than your everyday anthology of recipes. Like Potter himself, the book is wide-ranging, blending in, for example, conversations with geek celebrities who also happen to be foodies, such as Boing Boing coeditor Xeni Jardin and Flickr cofounder Caterina Fake. And like any geek, Potter can't resist a juicy dinner debate. He takes on the controversy about genetically modified organisms (GMOs), arguing that such innovations as vitamin A-packed golden rice can aid people in poor and developing parts of the globe. To dismiss such breakthroughs based on little or no data is cruel, he believes. "The GMO thing is a contentious argument," he says. "But it's really, really important to get science into that discussion. Science is about data and what the world does."

This year Potter is back to writing computer code and consulting for start-up companies. But he's still cooking for friends when he's at home in Cambridge, Massachusetts. "Cooking is about community," he says. "It's easy for me to go out and grab ingredients to cook for four people." Rather than hoofing it to a Central Square restaurant, he says, "I'd rather have them over for dinner and open the beer or wine we want."

Mark Baard writes about technology for the Boston Globe and other publications. Watch Jeff Potter make thirty-second ice cream (and a big mess) at www.cookingforgeeks.com.

Reader Responses to A Geek in the Kitchen