Lisa Caputo '86 has always been the consummate teammate. Whether playing a key role on an Ivy League championship field hockey team or joining the women's lacrosse team as a walk-on, Caputo has not only adapted to her role, she's mastered it. And in the years since graduating, she's brought that approach to the worlds of politics and business. After working on numerous political campaigns, in 1993 Caputo became press secretary to first lady Hillary Clinton at the tender age of twenty-seven. Since then she has gone on to leadership positions with CBS, Disney, and now Citi. 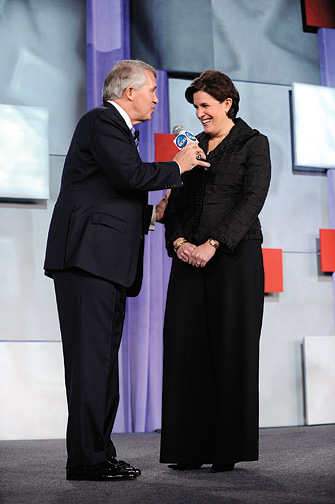 Stephen Nowland/NCAA
Caputo gets her Silver Anniversary Award at the NCAA's January convention in San Antonio.
The NCAA honored these accomplishments in January by giving Caputo its Silver Anniversary Award, one of the organization's highest honors. The award recognizes former student-athletes on the twenty-fifth anniversary of the end of their collegiate careers. "Being a student-athlete," Caputo says, "instills a great discipline of learning how to budget your time and manage your life on a daily basis. It prepares you for the juggle you do later in life, particularly as a working mom."

Caputo was humbled and overwhelmed by the news of the award. "This is Brown's award," she says. "This is not my award. This is about what Brown represents and the gift of a Brown education."

Caputo, like her brother, Richard Jr. '88, seemed destined for the University from the day she could walk. Her parents, Richard Caputo '60 and Rosemary Shea Caputo '62, are alums, as is her uncle, Charles Shea '70. She has fond memories of tailgating at Brown football games as a child. "I got so exposed to this great place at such a young age," she says. "It was instilled in me practically from birth that I must be ever true."

After excelling at three sports in high school, Caputo became a member of the 1984 Ivy champion field hockey team and also played lacrosse at Brown, even though her high school didn't even offer the sport. Off the field, Caputo was a staff writer for the Brown Daily Herald and concentrated in political science and French. 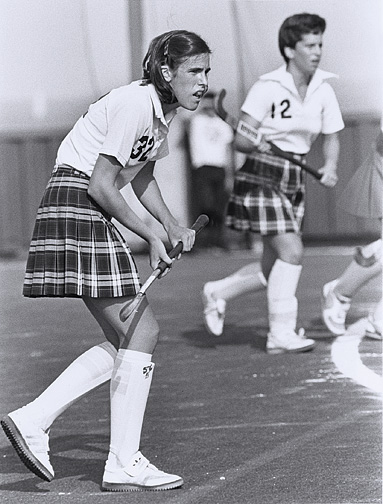 Courtesy Lisa Caputo
Caputo was a member of the 1984 Ivy champion feild hockey team.
It was also at the University that she discovered politics. "I don't think I knew I had such an interest in public service and in government until it got unlocked at Brown," Caputo says. For introducing her to the benefits of public service, she credits her political science professors, particularly former Brown professor Darrell West, who is now with the Brookings Institution.

After Brown, Caputo earned a master's at Northwestern and spent the next decade in government and politics. She was the national issues press secretary for the 1988 Dukakis-Bentsen presidential campaign, then worked as press secretary to U.S. Senator Tim Wirth of Colorado and U. S. Representative Bob Traxler of Michigan. At the 1992 Democratic National Convention, Caputo ran Al Gore's media operations, and, after working on the 1992 Clinton-Gore campaign, she was offered the position as Hillary Clinton's press secretary.

In Clinton, Caputo found an important mentor. The two women had an almost immediate connection. "She and I met in a hotel room for a half hour, and in the first five minutes we discovered that each of us had roots in northeastern Pennsylvania, specifically Scranton," says Caputo. "We immediately bonded."

Caputo became both deputy assistant to President Clinton and press secretary to Hillary during the president's first term, but after President Clinton was reelected, Caputo left politics for the private sector, taking a job as vice president of corporate communications at CBS. Next came a stint as vice president of global communications and synergy for Disney Publishing Worldwide before Caputo joined Citigroup (now Citi) eleven years ago. Her loyalty to Hillary remains, however, and she was an adviser during Clinton's campaign for the Democratic Party presidential nomination in 2008.

These days, Caputo is the driving force behind Citi's Women & Co., an organization aimed at tailoring investment help to women, who tend to live longer than men, spend more years in retirement, and take more time off to address family responsibilities. Eleven years ago, Citi told Caputo it wanted her to launch a women's financial services business. The company said it would be up to her to figure out what it should look like and how it should be organized and launched. Caputo is now Women & Co.'s chair and CEO, as well as executive vice president and chief marketing officer at the parent company, Citi.

Women & Co. now has more than 100,000 members and $37 billion in assets, deposits, and loans. The program also generated $320 million in revenues for Citi in 2009. "That has been such an extraordinary experience for me," Caputo says, "because I feel like I have been able to do a public service for women in the private sector." 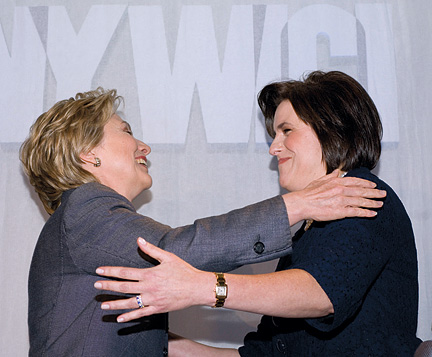 Courtesy Lisa Caputo
Caputo later became an advisor to Hilary Clinton during her recent presidential nomination run.
Thanks to the success of Women & Co., Caputo is a frequent public speaker on women's financial issues. Her political background has also made her a popular TV commentator. She analyzed the 2008 presidential election for NBC and MSNBC, and has served as a guest cohost of CNN's Crossfire and CNBC and MSNBC's Equal Time.

As the mother of two children—Drew, 7, and Caroline, 4—Caputo has also learned from her mentor how to balance family and work. Clinton raised her daughter, Chelsea, in the White House for eight years, and Caputo was a first-hand observer of how she put her daughter's needs first and was able to keep her out of the spotlight.

"Watching the way that they raised their daughter was a great lesson for me," she says.

Caputo was able to give the Clintons a taste of her own world at her 2002 wedding, which brought together her extended family, her Brown family, and her political friends.

At one point during the festivities, President Clinton pulled her aside and said, "I love this Brown crowd."