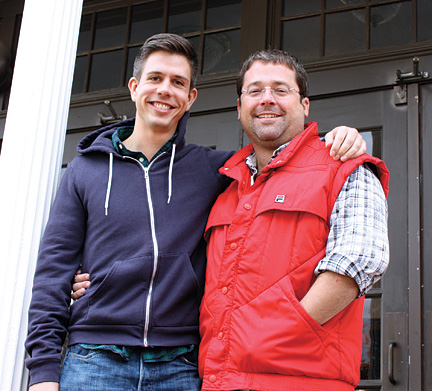 Huntington Theater
The playwright and the director: Stephen Karem and Peter DuBois.

Charles and Joseph Douaihy have just lost their father as the result of a practical joke gone wrong. Joseph's health is deteriorating. The boys' tough-love uncle moves a hospital bed into their living room because he can no longer climb the stairs in his own home. And when the kid responsible for the prank comes knocking, it's not to ask for forgiveness. If all this sounds like the makings of a tragedy, think again. Sons of the Prophet, the new play by Stephen Karam '02, is a comedy.

"The more tragic and the more extreme a situation, the more potential there is for comedy," says Peter DuBois '97 AM, the artistic director of Boston's Huntington Theatre Company, where he will direct Sons of the Prophet's world premiere in April. (In London in January, he directed Becky Shaw by Gina Gionfriddo '97 MFA) "When we're in incredibly tragic or really difficult situations in our own lives," he says, "humor is often where we go to try to make sense of the situation, and I think Stephen really understands that."

Sons of the Prophet was inspired by a news story about high school football players who put a deer decoy in the middle of a dark rural road as a prank. Swerving to avoid it, a teenage driver crashed and flipped his car. The accident left the driver disabled and his passenger severely brain damaged. The judge sentenced the football players to sixty days in juvenile detention, but suspended their sentences so they could finish the season. He prefaced his ruling by acknowledging, "I shouldn't even be doing this."

"I always get very obsessed over real incidents," Karam says. Although he draws inspiration from the news, incidents like these ultimately become "a catalyst for something more original." The deer prank sets the play in motion, but at its heart Sons of the Prophet is "very much a family play," Karam says. "A person passes, and the family is left to grapple with the mess."

Karam's play focuses on a Lebanese-American family, the Douaihys, who are distant relatives of Khalil Gibran. The play is set in Nazareth, Pennsylvania, where brothers Charles and Joseph are pulled between their family's Maronite Catholicism (and their grandparents' pull-yourselves-up-by-your bootstraps success story) and their identities as middle-American kids with limited options. "Growing up, I had this image of my grandfather as this sort of woeful, uneducated guy who arrived here with a needle and thread in his pocket," Joseph says in the play. "Now I'm like: the skills he had, three languages and a practical trade—I went to college and the only marketable skill I have is stuff I knew before college, like word processing."

Karam says all his plays are deeply personal, but Sons of the Prophet is "a little more naked." Half-Lebanese, he hails from a hardscrabble Pennsylvania town much like Nazareth. "Growing up Maronite Catholic in Scranton, I knew I was a little different," he says. But his "huge, huge, enormous family" and an even larger church community made it feel mainstream: "A little more incense, maybe, a little more Aramaic chanting. It wasn't until I got to Brown that I realized it's off the beaten path."

Karam has already had plenty of success writing for the stage. With PJ Paparelli, he wrote columbinus, based on the Columbine shootings; it was nominated for several Helen Hayes Awards. Speech and Debate, Karam's play about three misfit teenagers who uncover a sex scandal at their high school, made its debut at the Brown/Trinity Playwrights Repertory Theatre. After an extended run in New York City, it has since been produced more than seventy times around the country.

Karam's run of work is unlikely to slow down anytime soon. He is now working with Dan Harris, the director of Imaginary Heroes and screenwriter of Superman Returns, to adapt the play for the screen, and he's writing the libretto for a new opera by Nico Muhly about the wives of Joseph Smith.

Sons of the Prophet is the first collaboration for Karam and DuBois, but both say they felt an immediate connection. They had similar ideas about the play from the start. One of Karam's cardinal rules: evoke a sense of empathy without pity, sadness without wallowing. "A wallowing Joseph," Karam warns in the script, "is death to this enterprise."

DuBois got a closer understanding of this approach when he traveled to Scranton with Karam. They visited key locations: the bus station, a diner, a football game. "Part of what I loved was the feeling there—even though the town and the city have seen better days and we're in the post-industrial rust belt—that there was a sense of optimism, a sense of civic pride," DuBois says. "There was just a sense of people not giving up."

Sons of the Prophet is ultimately a play about pain, about both empathy and its limits. But don't expect to leave the theater ready to hurl yourself into the Charles River. DuBois assures potential audience members that it's "the funniest play about human suffering they'll ever see."