Sometime during 1995 Joe Fernandez ’85 found himself on an airplane sitting next to Vartan Gregorian. Fernandez, whose friends characterized him with words such as warm, smart, and kind-hearted, made such an impression on Brown's president that, by the time the plane landed, Gregorian had decided the University needed his new friend. The next year Fernandez was on the Brown Corporation's Committee on Minority Affairs, a role that triggered a happy fifteen-year collaboration between him and his alma mater. At the time of his death on December 18, 2010, from complications related to pneumonia, Fernandez, a longtime Providence resident, was president of the Brown Alumni Association and a Brown trustee. 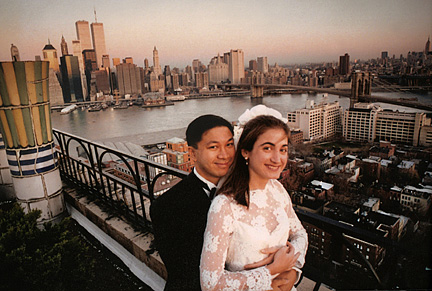 Courtesy Emily Maranjian
At Brown, Fernandez met Emily Maranjian '86, who later became his wife.
A soft-spoken, thoughtful, yet social man, Fernandez grew up in Williamsport, Pennsylvania, as the son of Filipino immigrants. A bright student, he attended Phillips Exeter Academy before concentrating in American civilization at Brown, where he met Emily Maranjian '86, who would later become his wife. After Brown he earned his law degree in 1991 from Harvard Law School, where a classmate was Barack Obama. Fernandez later cochaired Obama's presidential campaign in Rhode Island.

"From our time together in law school," Obama said after Fernandez's death, "to his work as a dedicated public servant in Providence, I knew Joe as someone who had lived the American dream and was committed to protecting it for his fellow citizens."

After more than a decade in private practice, in 2003 Fernandez joined the administration of Providence mayor David Cicilline '83 as city solicitor. Cicilline later credited Fernandez with playing a major role in the mayor's attempts to clean up the city's government. "Guided by a strong moral compass and deep commitment to public service," Cicilline recalled in December, "Joe led by example and earned the great respect of his colleagues and peers as a strong leader and expert legal strategist."

Fernandez resigned in 2009 to run for attorney general, promising "decisive, compassionate, and intelligent leadership." He faced off against two other Democrats in the September primary but drew only a quarter of the vote.

During most of his professional life, Fernandez was a dedicated volunteer who focused especially on providing more opportunity for women and minorities. He was president of Harvard's Asian American Law Students Association and led the Rhode Island Bar Association's Committee on Involvement of Minorities. In addition to his service on the Brown Corporation, Fernandez was on the boards of the Trinity Repertory Company and the Community College of Rhode Island Foundation.

As an activist within the Brown Alumni Association (BAA), Fernandez was a founding board member of the Asian/Asian American Alumni Alliance, chairman of the Multicultural Alumni Committee, and a board member of the Brown Club of Rhode Island. According to a BAA statement issued after his death, Fernandez, as president, increased the number of women and young alumni on the BAA board and urged BAA leaders to apply a "diversity lens" to their work. In 2006, the BAA recognized his efforts on behalf of Brown by honoring him with the Alumni Service Award.

In addition to his wife, Emily Maranjian '86, Fernandez is survived by twin daughters, Coco and Phoebe, as well as two brothers and a sister, Susan Fernandez '91. Since his death, friends and acquaintances have been posting remembrances on a "Remembering Joe Fernandez '85" Facebook page (http://www.facebook.com/pages/Remembering-Joe-Fernandez-85/166616960046377). Donations are welcome to the Coco and Phoebe College Fund, 286 Doyle Ave., Providence 02906.

Reader Responses to Protecting the Dream