A Moment of Change

For about a year, a weathered Brown booklet sitting on my desk would invariably catch the eye of one of my friends. Entitled Bear Facts, it's a 104-page description of Brown written by students in 1970. This booklet was one of the first things my mother, Jean Rosenheim Lange '74, received after her acceptance into Brown. 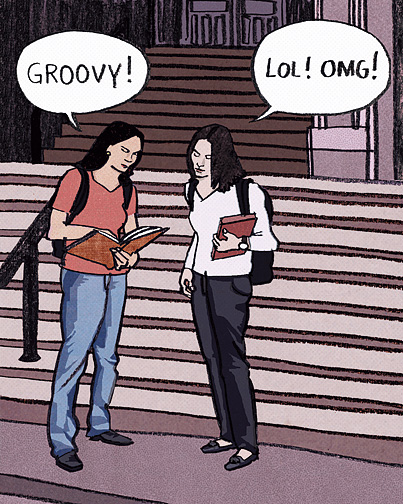 Bear Facts is like a CliffsNotes about the Brown experience, updated each year for members of the incoming class. There is a pervasive sense in it that everything about Brown is about to change, or is changing. The only steady message is encouragement to the next crop of students to continue to change Brown.

Each of my friends who flipped through Bear Facts' pages found something different. The political ones turned to the analysis of student protests and the role of ROTC. Some would comment on the changing gender structure as Pembroke merged with Brown. My aesthetically oriented friends would scoff at Brown's pride over its new brutalistic buildings and fixate on the fashion faux pas of 1970.

For me, the Brown described in Bear Facts seems at once familiar and foreign. The weather appears to be the only thing that has remained completely unchanged. The section on clothing recommends packing a heavy coat, boots, a raincoat, an umbrella, and a hat—all in boldface type, lest you forget that it might rain in Providence. Since 1970, however, the city has undergone quite an evolution, transformed from a town that "dies each evening at 6 PM," as Bear Facts puts it, to one that closes at 1:45 AM sharp.

The connections between 1970 and 2011 seem to be in there, but the two eras are not quite kindred spirits. Bear Facts reflects a moment of profound transition, of pervasive change. Brown was on the verge of something new, but its definition wasn't yet clear. My mother's college roommate, Wendy Ternes Malgieri '74, confirmed this when I spoke to her recently. "Bear Facts," she told me, "was outdated almost immediately—huge changes happened in the early '70s, and Bear Facts still has one foot very firmly planted in the '60s."

To me, this moment of transition for Brown is captured in the passage titled "Brown's Image." The section begins: "To put it succinctly: Brown has no image." But, rather than falling into the no-Brown-student-is-typical spiel, the booklet goes on to say that many people hadn't heard of Brown, and, if they had, it was something ranging "from a highly selective Ivy League college to a depository for Harvard-Yale-Princeton rejects."

This was the year after the New Curriculum was implemented; the Bear Facts staff called their university "the newly created Brown." They admit that they hadn't anticipated the challenges associated with this freedom. They write: "We thought that by changing everything from major policy decisions down to the specifics of deciding your major or living in a coed dorm, we had created a new university. We were wrong." They say that it's now the responsibility of Brown's new students to actually make these changes work, to foster and continue to change the newly created Brown.

So was this the moment when Brown moved from having no personality to having a personality that was so multifaceted it became ineffable?

Perhaps this is what continuously drew my friends and me to this booklet. The description of Brown––parietals, protests, politics, cigarettes, and typewriters—is a historical glimpse, but the appeal is timeless. It's a message to every future student to maintain Brown's imageless image.

Reader Responses to A Moment of Change