This fall, Assistant Professor of English Jean Feerick taught Eco-Shakespeare, a class that looked at Shakespeare's writings to decipher his view on nature. 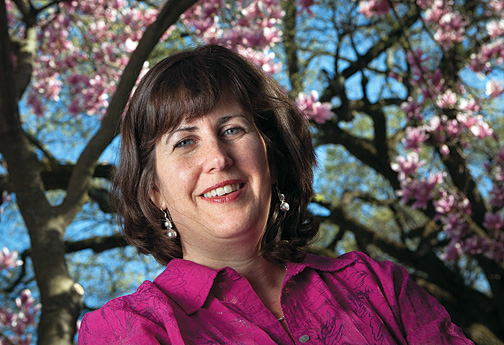 BAM What gave you the idea for this course?

FEERICK Shakespeare grew up in Stratford-upon-Avon, located near the Forest of Arden. He likely saw firsthand the daily struggles of people trying to live off the land. He was certainly aware of the wheat shortages during his time, which were caused by natural disaster. There was also a mini–Ice Age in this period. These events come up in subtle ways in his plays, where we see violent weather along with famine and rebellion.

BAM And how did Shakespeare view nature?

FEERICK In Shakespeare's day people had not yet fully accepted the idea of a separation between the human and the natural, human and nonhuman. Famously, Ophelia distributes her flowers at the end of Hamlet, but less famously she's also described in the play at first as a blossoming and then a wilting flower. Finally at her death, she's a weeping willow. Similarly, when King Lear comes undone as monarch, he is occupying the heath in a huge storm—his mental turmoil is a version of the storm. We use nature primarily as a metaphor, but Shakespeare went further in making the connections between humans and their environment. We no longer see trees as resembling people or emotions as weather. He did.

BAM You began the class by having students read a speech from Henry V delivered by the Duke of Burgundy in the aftermath of Henry's defeat of France's army. Why this passage?

BAM Why is that significant?

FEERICK The way he is understanding what it is to be natural is quite different from today. His concept seems to be that nature requires human intervention to be fully natural, that left to its own devices it will fail to achieve its full potential. In the case of France, the war has blocked the cultivation of land and the fields have become 'unnatural.' Shakespeare's contemporaries referred to this as a process of degenerating, a kind of degrading growth. The word expressed a moral failure, which nature was a part of.

BAM Was Shakespeare an environmentalist?

FEERICK There's a sense in his work of resources being unjustly allocated and leading to the vulnerabilities that cause famine. He certainly is aware of change, change happening that is not for the best. At the time, propertied folks were enclosing their land, causing the less privileged to be uprooted and forcing many to move to the city. Shakespeare seems to view these innovations as doing a violence to the people taking care of the land. He seems to favor a less destructive handling of land, of natural resources. I see these concerns as expressing a diffuse proto-ecological view on his part.

BAM What can we learn from Shakespeare's view of nature?

FEERICK His plays open up new ways of imagining the relations between human and nonhuman. We need to have a softer division between things that are cultural and things that are natural. The Renaissance offers us a way in that direction. We can take steps to reverse our neglectful treatment of the world if we see ourselves as part of nature. We harm ourselves when we harm our environment. That view was much more accessible to Shakespeare. He believed in a sentient world in ways that we are only now beginning to rediscover.