Who are John, Paul, and Peter? Although they sound like a 1960s folk group, they're actually three of the greatest home-run hitters in Brown baseball history. John King '79 established the career record of thirty-two homers back in 1979. Paul Christian '06 tied the mark in 2006, and Pete Greskoff '11 surpassed it this spring season, when he ended his Brown career with thirty-four home runs, the new record. 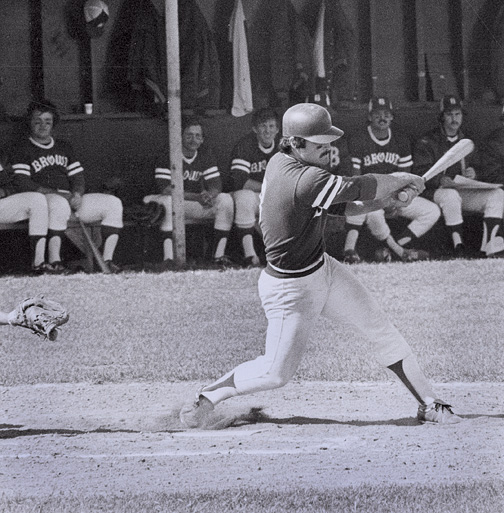 Brown Archives
John King '79 set the career home-run record when he graduated with thirty.
How did they do it? How does a home-run hitter think? We asked them all for their slugging tips:

KING For as long as I can remember, I was always a home-run hitter. My approach has never changed from all levels, as my goal was to hit the ball hard where it was pitched and put it in play. I always wanted to have the highest batting average because that meant I was hitting the ball consistently. Some of my best hits were doubles and triples. However, I was told that, the way I made contact with the ball, I turned fly balls into home runs simply because I came down through the ball, and the backspin gave it distance.

CHRISTIAN I wouldn't say I had an approach to hitting home runs in particular. I spent so much time in the batting cage getting in as many repetitions as possible that, for the most part, I took the same approach to the plate time after time. I went up to the plate, tried to pick up on the spin out of the pitcher's hand and make solid contact with the ball. After that, whatever happens, it is out of your control. If you try to do too much, that is when you will find yourself in a slump real quick.

GRESKOFF The hardest thing about hitting home runs is that, if you actually try to hit them, you won't. They just happen. I just try to hit the ball hard with backspin and let the ball do the rest.

BAM Did you study pitchers much? 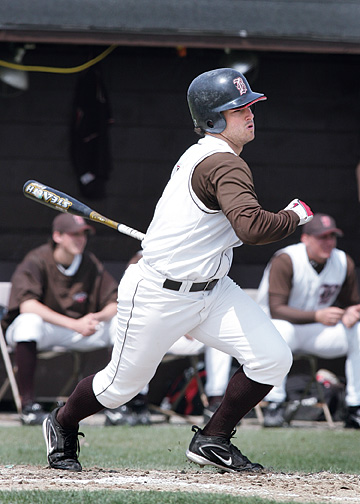 Brown Archives
Paul Christian '06 tied King's record of thirty-two career home-runs, a mark that Pete Greskoff '11 surpassed this year.
KING Yes, I always studied pitchers before and during the game. While I played most of my four-year Brown career at third base and second base, I was a catcher in high school and in American Legion and for part of my freshman year at Brown. I learned to read the pitchers when I was a catcher. I always called my own game when I caught, and this helped me to be a better hitter. I would study the pitcher's timing, release, and location. I never wanted to know what the pitcher was throwing, if I had a man on second trying to steal signals from the opposing catchers. I wanted to work it myself, because hitting is all about timing and reaction.

CHRISTIAN Yes, absolutely. After warm-ups, I would always get out near the on-deck circle as close I could get to the plate and try to time his speed with my practice swings. You should also be aware of the situation the pitcher is in during the game. If he has dug himself into a predicament, he will most likely try to get ahead of you early in the count, so you should be ready to attack on the first pitch.

GRESKOFF We get scouting reports on teams before the games, but most of the studying comes from just watching them during the game and trying to find tendencies, such as throwing certain pitches in different counts.

BAM What is the best Ivy League park for hitting home runs?

KING Because half of my career games were at home, I liked AD [Aldrich-Dexter] Field. I knew it well and could tell when I hit the ball whether it was out or not.

CHRISTIAN Columbia, hands down. I think if John, Pete, or I had played at Columbia this record would be a different tale.

GRESKOFF Well, when the wind blows out, our Murray Stadium is definitely the best, but I like hitting at Dartmouth, too.

BAM What was the best non-Ivy park that you visited during your four years?

KING I would have to say the University of Connecticut. UConn was a power in my day and was usually a top team in the East.

CHRISTIAN Besides playing at Fenway Park for the All-Star game, I would say either the University of Florida or the University of South Carolina. They were both fantastic parks with lots of energy, and it was a lot of fun to play there.

GRESKOFF Coach [Marek] Drabinski has scheduled quite a few great teams. I'd say I liked Auburn's stadium the best, but Pepperdine had the best atmosphere, overlooking the ocean.

BAM Did you set personal statistical goals during your playing career?

KING No, I never set any personal goals, as I believe baseball is a team sport. My purpose when I came to the plate was to get on base or knock in a run. Statistics will fall into place where they may.

CHRISTIAN No, I did not set particular statistical goals for my career, but I would be lying if I said I didn't follow my stats throughout the year. I think setting in stone a particular goal and getting caught up in that might be one of the worst things a player can do. All you can do is go out mentally and physically prepared, game in and game out, and in the end you will get where you want to be.

GRESKOFF I try not to set statistical goals, because I don't like to be worried about stats. I feel the less thinking you do at the plate, the better off you will be.

BAM What is your favorite Brown baseball highlight?

KING One was 1977, when we played our last two games of the year against Northeastern. We were losing both games but came from behind in the last inning each time to win 10—9, 10—9. That day I hit four homers and our team finished with the most wins in Brown history and a number-five ranking in New England. Chris Berman '77 did the play-by-play during that season, as he did for our Ivy League football champions.

CHRISTIAN I had a lot of fun on our road trip out to Santa Clara in '05, and I thoroughly enjoyed beating them in game one.

GRESKOFF I would say sweeping Harvard two years ago at home on Spring Weekend was my best memory. That was the best crowd we've had at home, so it was a great atmosphere, too.