It usually happens like this: parents immigrate to the United States, but they try to get the kids to follow their home country’s most important traditions. Instead the kids color their hair pink, become fans of hip hop, and are embarrassed to speak their family’s native language in public. 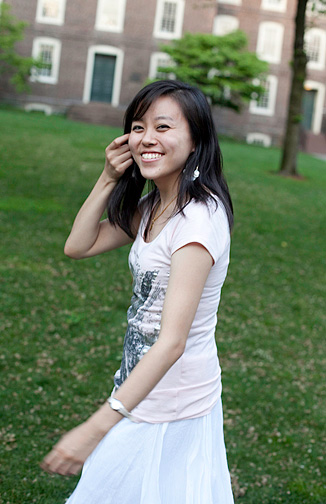 But in the case of Ellen Duong, the process was reversed. It was her mother and father who were eager to assimilate, and it was Duong who insisted on discovering her roots. “They felt it was better to adapt to American society,” Duong says. “But being Chinese is integral to my identity.”

Duong’s parents arrived from China in the early 1980s, first settling in Boston, then moving to Woonsocket, Rhode Island, in search of more affordable housing. She was raised mostly by her mother, Trinh who worked on an assembly line earning slightly more than minimum wage. Duong says her mother wanted her to have all the advantages she herself lacked, especially the opportunity to receive a good education—even if it meant assimilating.

“My mother would tell me if you get a good education you can avoid all [those hard times],” Duong says. Her mother felt “it was better to drop some things from our past.” By the time Duong arrived at Brown, she says, she “felt completely Americanized.”

Duong received a Sidney E. Frank Endowed Scholarship to attend Brown. As soon as she started freshman year, she enrolled in a Mandarin Chinese language class. This summer, she has a scholarship from the federal government to tour China and improve her language skills. It will be her first trip to the country.

There was one area, however, where Duong’s mother didn’t Americanize. Throughout her childhood, when Duong fell ill, her mother would take her to see a Chinese herbalist in Boston. The Chinese doctor’s packet of herbs seemed to work well against common colds and routine physical pains. It would have been too much of a change for her mother to try a Western approach, Duong says: “She was very comfortable with Chinese medicine.”

A chemical biology concentrator, Duong plans to eventually earn a PhD in pharmacology. “I think Western medicine is awesome,” Duong says, but she also wants once again to find a way to hold onto her Chinese heritage. She is a big believer in integrative medicine, which for Duong means using Chinese methods alongside Western ones, using the best of both.
“My interest in medicine sprang from the Eastern side,” says Duong. “I’ve always been amazed how a simple herbal brew can make you feel better.”