By Norman Boucher / July/August 2011
July 15th, 2011
The Most Human Human: What Talking to Computers Teaches Us About What It Means to Be Alive by Brian Christian '06 (Doubleday). 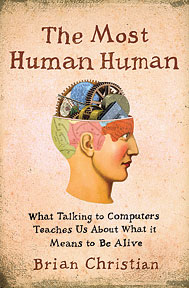 "Humans have always been preoccupied with their place among the rest of creation," writes Brian Christian in The Most Human Human, his erudite yet emminently readable examination of the quest to make computers more like people. "The development of the computer in the twentieth century may represent the first time that this place has changed."

Christian's book is structured around his participation as a human "confederate" in an artificial-intelligence event called the Turing test, in which judges chat via keyboard about whatever they want with a pair of correspondents, one a human and one a computer. The judges have five minutes to figure out which is which. Alan Turing, the British mathematician who conceived the event, predicted that by the year 2000 computers would be able to fool at least 30 percent of the judges into believing they were the humans. So far, that hasn't happened, although the computers came closest in 2008.

Turing thinks he knows why. Take the chatbots companies use to deliver so-called customer service these days.They sound human, but they don't act it. The reason, Christian notes as he analyzes the underlying issues of this quest, is that the history of computer science is one of too narrowly defining what it means to be human. Where artificial intelligence still stumbles is with the ability of humans to make judgments and, in a favorite Christian characterization, to "figure things out" by using more than analytical tools or techniques.

Computers may have challenged us beginning in the twentieth century, he writes, but "what we are fighting for, in the twenty-first century, is the continued existence of conclusions not already forgone—the continued relevance of judgment and discovery and figuring out, and the ability to continue to exercise them."

Reader Responses to Botching the Bots