For Christina Hull Paxson, March 2, a chill, overcast day in Providence, began with a peaceful, arm-in-arm stroll across the College Green with her husband, Ari Gabinet. It was the last unnoticed campus walk she will enjoy for a very long time. 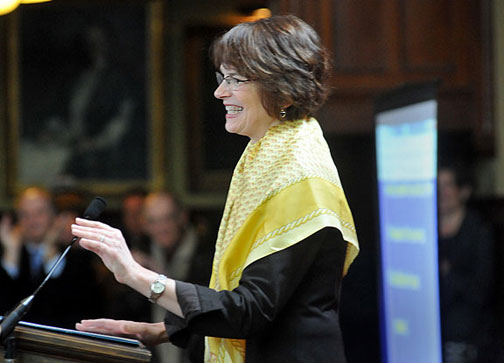 By 11 a.m., the Brown Corporation had approved Paxson as the University’s 19th president, and by 12:20, she was standing at a lectern in Sayles Hall acknowledging a standing ovation from an overflow audience of students, faculty, staff, and Corporation members. Smiling broadly and applauding in the front row was Ruth Simmons, whom Paxson will succeed on July 1. (Scroll down to watch a video of the event.)

Introduced by Chancellor Tom Tisch ’76 as the “worthy and fantastic successor to our Ruth,” Paxson smiled patiently as Tisch described the “integrity, passion, insight, and caring” that had convinced the twenty-nine-member search committee to choose her as Brown's next leader. Now the dean of the Woodrow Wilson School of Public and International Affairs and the Hughes Rogers Professor of Economics and Public Affairs at Princeton, Paxson has spent her entire career at that school. She has served as chair of Princeton’s economics department—in his introduction, Tisch called it “one of the toughest jobs at Princeton"—and last year was elected vice president of the American Economics Association. She was also elected to the Council on Foreign Relations this year.

Christopher Eisgruber, Princeton's provost, describes Paxson's leadership style as "built upon sound values, careful listening, deft political skills, and the courage to make needed decisions. She has a remarkable ability to bring people together around a shared sense of scholarly mission. She knows how to make people—faculty, students, and alumni—feel appreciated and respected, even when she needs to make decisions with which they might disagree."

A graduate of Swarthmore who earned a Master's and a PhD in economics at Columbia, Paxson is a health economist who is somewhat unusual for studying the relationship between economic status and health in both the developed and developing world. In 2000 she founded the Center for Health and Wellbeing (CHW), an interdisciplinary unit within the Wilson School, to take a broader look at health policy. The center’s website describes its goal as understanding “the determinants of health and wellbeing, and the role that public policy plays in shaping the quality of people's lives.” Paxson’s own research into the lingering effects of Katrina on New Orleans residents details the post-traumatic stress the hurricane has triggered.

"On average,” Paxson is quoted as saying on the CHW website, “people were not back to baseline mental health and they were showing pretty high levels of post-traumatic stress symptoms. There aren't many studies that trace people for this long, but the very few that there are suggest faster recovery than what we're finding here." (Read a summary of Paxson's research here.)

At her Sayles Hall debut, Paxson, the mother of two sons, ages 22 and 14, could hardly characterize her own emotional state. “It’s impossible to describe what I feel right now,” she said. At a press conference earlier in the day, she had noted that, thanks to the Simmons years, the University is in “an exceptionally strong position” and that once in office she would “build from strength, which is the best possible place that a new president can be.” She picked up that theme again in Sayles Hall by saying, “I am very aware that I have been given a great trust." The most important thing she learned about Brown through the selection process, she said, is that “I see in Brown an aspiration to continue to grow, and change, and improve. This is anything but a complacent place.”

Paxson offered no specifics about what her policies at Brown might be, referring only briefly to the University’s ongoing negotiations with Providence over its financial payments to the city. During her press conference she did emphasize that the presence of both a medical school and a program in public health played a role in luring her away from Princeton, and at Sayles Hall she expressed the hope that Brown might play a role in addressing the “big challenges in health and health care in this country.”

Perhaps the most entertaining moments of Paxson’s introduction to the campus community came when she strayed from her scripted remarks to describe her first experience with the University, which came when her big brother, William Paxson ’75, “a clean-cut, studious kid,” left to study at Brown and came home to Pittsburgh during Thanksgiving of his freshman year a changed young man. “He had long hair,” Christina Paxson said. “He listened to new music. He argued with my mother about the ethics of eating meat. My mother was mortified. I thought, ‘This is what happens when anyone goes to college.’ And then I learned, ‘That is Brown.’”

Loading the player ...
What do you think?
See what other readers are saying about this article and add your voice.