Mariah Draper Calagione, a public policy concentrator, credits Brown with giving her a well-rounded education and teaching her values and morals that have since served her well. But she says she might have been better prepared for her post-college life if only she’d spent more time drinking good beer. 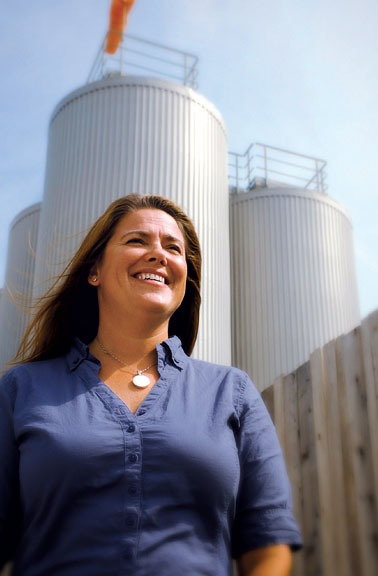 Courtesy Mariah Draper Calagione
Calagione at the Dogfish Head brewery in Delaware.
Calagione is vice-president of Dogfish Head brewery, a top-quality beer manufacturer based in Milton, Delaware. At Brown, she says, “I drank whatever we could scrape together, like every college kid in America.” That all changed during the summer before her junior year, when she worked as a waiter at the now-shuttered restaurant Nacho Mama’s Burritos in upper Manhattan. “It had a ton of craft beer there, or what seemed like a ton at the time,” she says.

Back then, Calagione was dating Nacho Mama’s bartender, Sam Calagione, whom she later married. High school sweethearts, they shared a passion for such artisanal beers as Sierra Nevada and Anchor Steam. “I wouldn’t say it was a turning point in my life, but it was for Sam,” Calagione says. “He was taking writing classes at Columbia, but then he started writing a business plan” for a brewpub.

Until the late 1990s, Calagione worked as a news producer and editor on TV stations in Providence and Salisbury, Maryland. But when she saw how much her husband enjoyed his work, she decided to join him. “I loved working in news, but I liked building a small business,” says Calagione, who has a son, 12, and daughter, 9. “And the beer industry is fun.”

Today, Dogfish Head sells an assortment of suds with names like Midas Touch and Raison D’Etre in twenty-seven states. Calagione says the company grew by about 20 percent over the last year alone. Dogfish established its style by using unconventional ingredients. It adds raisins to its Belgian-style ale Raison D’Etre beer and gesho root from Africa in its Miles Davis’ Bitches Brew.

The company also has a line of beer made according to ancient recipes. Midas Touch is made with the same ingredients found in 2,700-year-old drinking vessels from the tomb of King Midas—barley, honey, and gesho root. “We don’t want to become one company where one beer is known as our flagship,” says Calagione, who handles marketing, communications, and merchandising.

In recent years, Dogfish began to fear that rapid growth was threatening its independent identity. Last March, the company announced it would stop selling in four states, Canada, and the United Kingdom because it couldn’t keep up with the runaway demand. Dogfish was swamped with complaints and angry messages, many from Rhode Island, one of the states the brewery abandoned.

“It was a lot more vehement than we expected when we announced that we were pulling back,” Calagione says. “It was nasty. There’s a lot of passion in the beer community.”

The company, which is still based in Delaware, employs more than 200 in the brewery and its restaurant, the Dogfish Brewpub in nearby Rehoboth. At 4:30 on Fridays work comes to a halt as coworkers gather for a drink in the tasting room.

“We want our culture to stay the same. We fight for that every day,” Calagione says. “We fight internally to keep our culture fun, and that’s why we love to work here.”