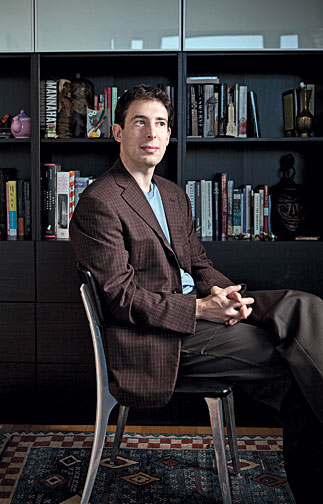 If Eric Klinenberg ’93 is correct, a momentous cultural change is going on largely unnoticed: in record numbers, people are choosing to live alone.

As social animals, human beings have always lived in groups, whether in nuclear or extended families. For most humans, life has followed the same cycle: grow up with parents, find a mate, and raise children.

According to Klinenberg’s ground breaking and fascinating new book, Going Solo, over the past fifty years that has changed. Now more than half of American adults are what he calls “singletons”—individuals living alone—and they account for 28 percent of households. They outnumber childless couples and nuclear families. (Klinenberg excludes from these numbers people living alone involuntarily in prisons and nursing homes.)

It might be tempting to chalk up this trend to American individualism, but Klinenberg reports that the development is even more pronounced in countries with strong social welfare systems. In Sweden, for instance, 47 percent of households contain just one person. In the city of Stockholm, singletons make up an astounding 60 percent of households.

Klinenberg, an ethnographer who teaches at New York University, was asked to do this study by the Robert Wood Johnson Foundation, and he says he conceded reluctantly. His first book, Heat Wave, was about the 1995 catastrophe that killed 750 people in Chicago. Analyzing the death toll, he’d discovered that a disproportionate number of the victims were men who lived and died alone, isolated from friends and family who might have saved them. Although women are more likely to live alone, he observed, men are far more likely to die alone.

Klinenberg says he had no personal interest in the topic. No singleton, he and his wife, Caitlin Zaloom ’95, have two children. But, he writes, “I recognized that I had come to [the subject] through its bleakest angle, and decided that by learning the story of how and why so many of us have come to live alone, I might also discover something  fundamental about who we are and what we value today.”

Over seven years, he and a team of researchers interviewed more than 300 adults living alone in New York City, Chicago, Austin, San Francisco, and Washington, D.C., as well as in other countries with high rates of solitary living: England, France, Sweden, Japan, and Australia. They questioned a wide range of people: newly independent twenty- and thirty-somethings, men and women living alone after a divorce, widows and widowers, wealthy homeowners, apartment dwellers, and tenants in single-room-occupancy dwellings.

Lest we place too much significance on solo living as the new black, Klinenberg points out that for most adults it’s a temporary arrangement, a consequence of other cultural changes. As young people wait longer to marry, for example, they often shed roommates and go out on their own as a kind of rite of passage, a signal to others that they’ve arrived. Living alone gives young men and women the opportunity to learn valuable life skills and to reflect on the kind of person they might want to marry.

With 50 percent of U.S. marriages ending in divorce and the rate of remarriage dropping, many middle-aged men and women enter a second phase of solitary living. Although many of these interviewees reported feeling lonely at times, Klinenberg says they were less so than when they’d felt trapped in unhappy relationships. He was particularly moved by the number of women who described busy lives—happily balancing work, friendships, family, and other obligations. Many told him they had no time to date, and in some cases weren’t particularly eager to jump back into a partnership.

While the idea of aging alone has an ominous ring to it, Klinenberg reports that only 2 percent of widows and 20 percent of widowers remarry, and only 20 percent of the elderly live with one of their children. Instead, he says, they choose “intimacy at a distance.” Several widows described their reluctance to take on the job of caretaker to a husband who would likely die before them. They preferred to live separately, maintaining these intimate relationships while continuing to attend lectures and play mahjong and bridge with friends.

This is not to say that living alone is always easy. Klinenberg found that the late thirties and early forties can be deeply painful for single women, whose biological clocks may be ticking loudly. Aging alone is especially dangerous for men, he reports. Without the skills that enable many women to build social networks, older men can become isolated and vulnerable. Other risk factors include poverty, illness, depression, and living in a dangerous neighborhood.

These findings may sound alarming to admirers of Robert D. Putnam’s Bowling Alone and Robert N. Bellah’s Habits of the Heart, both of which warned that individualism is undermining America’s collective spirit. Klinenberg praises both of these books, but he is more sanguine about the consequences of our experiment in solitary living. He argues that instead of providing a hothouse for narcissism, living alone affords modern city dwellers sorely needed time and space for solitary reflection. Just as Thoreau’s solitude at Walden Pond was interspersed with meals at his mother’s house and visits with his Concord friends, many adults today use their apartments as temporary havens from an over-connected world. We come home, get our bearings, and go out to brunch with friends.

Reader Responses to Two's a Crowd