This is not your father’s gym. Among the delights students find in the new Nelson Fitness Center is a sun-drenched space containing 185 exercise machines: treadmills, ellipticals, upright and recumbent bikes, rowing machines, and spinners—most with their own touch screens for viewing cable TV and surfing the Internet. On pneumatic weight-lifting machines, students can calibrate the air pressure to within an ounce, ensuring more constant and consistent resistance than traditional weight machines can offer. And the pièce de résistance is a pair of Trixter X Dream Exercise Bikes, virtual reality machines on which you race through three-dimensional courses projected onto a screen. The bike’s handlebars rotate, and hand brakes slow you when you’re going downhill. When you shift gears—and, yes, there is a gearshift—the computer recalibrates the tension in the pedals and adjusts your speed through the virtual terrain. “This is the finest fitness center in the Ivy League,” says Matthew Tsimikas, Brown’s assistant director of athletics. 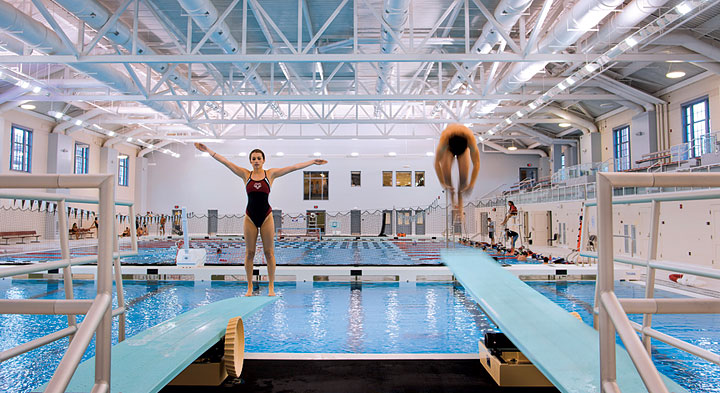 Divers barely make a ripple in the new waveless pool, so lap swimmers at the opposite end aren't disrupted.

More than ten years in the making, the $46 million aquatics and fitness complex opened April 15. In addition to the Garonzik Fitness Area housing those 185 machines, it includes the David J. Zucconi ’55 Varsity Strength and Conditioning Center and the Katherine Moran Coleman Aquatics Center, which has a state-of-the-art pool. A small café, offices, and three dance studios fill out the center.

Next door is the Olney-Margolies Athletic Center with its indoor track and basketball courts. Across the newly landscaped Ittleson Quadrangle (a former parking lot) are Meehan’s ice rink and the Pizzitola Sports Center’s squash, tennis, volleyball, and basketball courts. And right behind the new complex are the playing fields. All of this makes for a fitness and athletic super-complex that rivals any other. 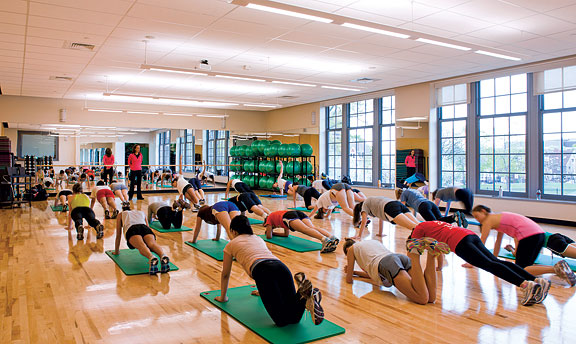 Brown first started thinking about overhauling its recreational facilities back in the late 1990s, when it became clear that the OMAC, which was built in 1981, was no longer meeting students’ needs. There was only one dance studio for exercise classes, and spinning classes were held in a basement squash court of the Smith Swim Center.

Raising money and drafting an architectural plan took several years. “At first, we were just not sure what the right answer was,” says Tom Bold, the associate athletic director for facilities. “The dreams were a little too lofty at the start, given how much we needed to fund-raise.” Eventually, Brown hired the prestigious Robert A.M. Stern Architects to design a building that would house new fitness equipment and a training area for varsity athletes.

Then, in 2007, building inspectors discovered rotting wooden support beams in the Smith Swim Center, and Brown had to shut down and demolish the entire facility. With a financial boost from the estate of Raymond Moran ’41, administrators reconceived the project to include a new pool and aquatics fitness center, and architects came up with a redesign. In the meantime, Brown built a temporary aquatics bubble behind the OMAC so the swim and polo teams could practice.

The new aquatics center is leagues ahead of the old. The pool is fifty-six meters long, six meters longer than the standard Olympic pool, which allows room for two moveable bulkheads. It’s now possible to have diving practice at one end of the pool, swimming practice in the middle, and a general swim for the public at the other end. Draining grates level with the top of the water make the pool wakeless; a diver can hit the water at one end without creating a wave elsewhere. 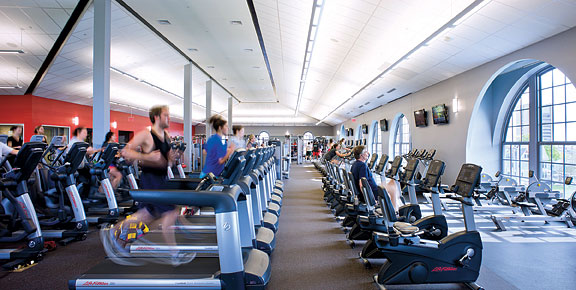 Gary Brewer, the project partner at Robert A.M. Stern and the facility’s architect, says he drew inspiration from the red-brick factory buildings he saw as he rode the train from Providence to New York City. The new building’s arched metal windows are meant to give the facility an “industrial character,” he says. At the same time, the building doesn’t overly dominate the block. The façade faces Hope Street, and the swimming center is tucked inconspicuously behind it.

The complex is also relatively green. Brewer’s design allowed Brown to salvage and reuse the 1920s clock tower and cupola that stood atop Marvel Gym until it was razed ten years ago. The 19,000-pound cupola was hoisted onto the new center’s roof last fall.

Plus, the aquatics center provides its own electricity. More than 168 solar panels on the roof heat the million-gallon pool and power the lights.