Lesley Ewing ’74 knows a thing or two about disasters. A senior coastal engineer with the California Coastal Commission, Ewing assesses how well coastline infrastructure will stand up to a natural disaster. Over the years, she’s looked at wreckage from storms, hurricanes, and floods. But nothing, she says, prepared her for what she saw in the wake of last year’s earthquake and tsunami in Japan. 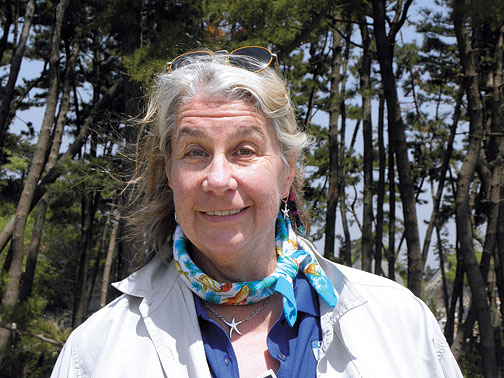 “This was the worst I’ve ever seen, by far,” she says. “Just miles and miles of coastline and infrastructure wiped out.”

Ewing earned a Brown civil engineering degree and worked as an environmental engineer until, she says, she “became rather bored with it.” When she saw a job description for a coastal engineering position with the U.S. Agency for International Development, she decided that was the kind of work she wanted to do. She earned a master’s in coastal engineering at UC Berkeley in 1989 and landed a position at the California Coastal Commission.

Ewing’s job mainly involves reviewing proposed building projects to evaluate their environmental impact on harbors, beaches, and wetlands. She also makes recommendations on how to make structures that can stand up to erosion, waves, and tsunamis, and lobbies communities to draft evacuation plans for possible tsunamis.

Ewing traveled to Japan three times over the past year to inspect the wreckage left by the earthquake and tsunami. The American Society of Civil Engineers sponsored two of those visits so that she and her team could look for ways the United States could improve its readiness for a similar disaster.

The Tohoku earthquake measured 9.0 on the Richter scale, but even more destructive was the tsunami it triggered, a thirty-to-sixty-foot-high wall of water that ravaged hundreds of miles of Japanese coast and caused meltdowns in the reactors at the Fukushima nuclear power plant. Ewing found that some protections—the country’s barrier walls, for example—had withstood the force of the waves. But even they could not hold back the volume of water: the tsunami simply rolled over them. “It was almost surreal,” Ewing says. “You’d see these walls that were still almost fully intact, and then this vast path of destruction behind them.”

Other tsunami-protection measures failed disastrously. A greenbelt of pine forests intended as a buffer didn’t even slow the storm on its way toward the town of Kamaishi, on the island’s northeast coast. The waves ripped up the trees and turned them into battering rams. “I’m an environmentalist at heart, and I hate to ever say that trees are not great,” Ewing says. “But with a tsunami this size, they were not effective.”

The conclusion Ewing drew from her studies is that there’s not much that California can do to protect itself beforehand from a sixty-foot wall of water. Teaching people to be ready to flee to higher ground inland at a moment’s notice, she says, is probably the best the state can do.

“You can’t engineer for everything,” she says. “Some events are just outside of what you can expect or design for. You have to have evacuation plans.”

And it may be just a matter of time before California has to use the plans Ewing proposes. According to seismologists, the Cascadia Subduction Zone off the West Coast is capable of generating  earthquakes 9.0 or higher, which could produce huge tsunami waves. Looks like we’re overdue for a big one.