From the laboratory at his home in Cambridge, Massachusetts, Bob Doyle ’58 thinks about chaos, chance, creativity, and free will. It’s the next chapter in the intellectual growth of the man who invented desktop publishing software, the first handheld video game, and the technology for the podcast. Over the years, he’s earned millions of dollars from his innovations and devices. Now financially independent, he’s turned his attention to what he considers his most important venture yet—solving the major questions of existence. 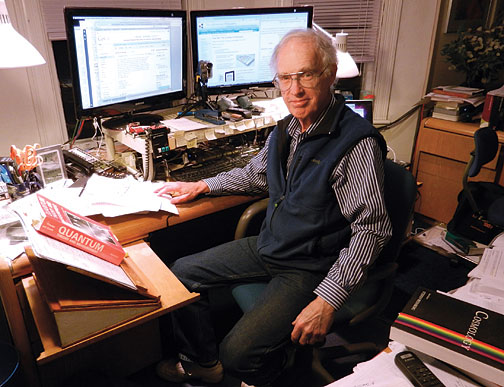 Doyle ponders the mysteries of existence from his home in Cambridge.

Doyle grew up poor in Providence, the son of a steelworker. In high school he wrote a paper on Einstein’s theory of relativity, prompting his teacher to suggest he become an astrophysicist. At Brown, he took a slew of science courses, but also studied philosophy and religion. It was Brown philosophy professor Curt Ducasse, Doyle says, who made him want “to find out if science could point to a universal good.”

Doyle earned a doctorate in astrophysics at Harvard in 1968, going on to work for the Harvard Observatory and then NASA. In the early 1970s, he led NASA’s Skylab Joint Observing Program, which consisted of 250 ground-based observatories around the world working in conjunction with several space telescopes. He soon left the agency to start his own company, Super8Sound, which sold film production and editing systems for Super 8 millimeter film cameras. French filmmaker Jean-Luc Godard was a client.

In the meantime, Doyle began working on a prototype of a portable video game, convinced that sound and computer technology would change the toy industry forever. He got Parker Brothers interested, and in 1977 the Merlin hit the market. Looking something like a portable phone with buttons, the Merlin came with six games, including blackjack and a music game that allowed the player to program a tune and play it back. In 1978, the December cover of Newsweek pictured Doyle beside Santa Claus, touting the Merlin as one of the hottest games of the season. Doyle also developed Mattel Electronic Football, Milton Bradley Electronic Battleship, and a submarine pursuit game.

In 2003, Doyle was asked by public radio host Christopher Lydon to help him post an audio recording of one of Lydon’s shows on the web. Doyle researched the best audio tools, including microphones, headsets, and telephone and computer audio interfaces. The recording Lydon eventually put up on his blog was originally called “blog audio.” Now it’s known as the podcast.

In recent years, Doyle has turned his attention to philosophy, pondering the problem of free will. His 2011 self-published book, Free Will: The Scandal in Philosophy, is a treatise on why free will is a more important factor in decision-making than many philosophers believe. On his website, informationphilosopher.com, Doyle outlines a new approach to philosophy, which he calls “information philosophy.” Using the tools of physics, cognitive science, and philosophy, it seeks to answer the question, “What is the process that creates information structures in the universe?” Doyle writes on his website, “Increasing information (a combination of perfect replication with occasional copying errors) explains all emergent phenomena, including many ‘laws of nature.’”

Right now, most philosophers are not willing to accept his views. But Doyle expects this will eventually change. Then, he says, he will be known not only as a famous inventor, but also as a great thinker.