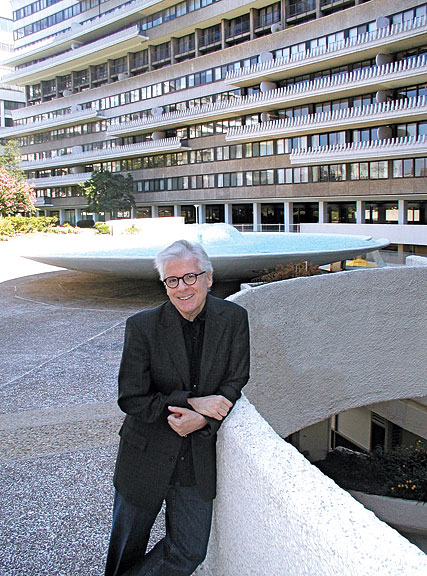 William Bodenschatz
Novelist Thomas Mallon, at the scene of the crime, the Watergate complex.

Watergate’s plot is well known, and the criminals who botched it are immortalized in history, so the trick for a historical novelist is to bring such well-known characters credibly to life, with all their vanities and regrets and secret motivations. In his new political satire, Watergate, Thomas Mallon takes the bare bones of the break-in and creates a page-turner that is at once hilarious and heartrending.

Mallon tells his story from the perspectives of people who fly under the radar in most Watergate accounts. Absent are Woodward and Bernstein, and White House special counsel Chuck Colson ’53 has only a bit part. Instead Mallon focuses on Fred LaRue, the elusive aide who begs campaign director John Mitchell for cash to pay off the Watergate “plumbers” and cover up the cover-up.

Mallon portrays Howard Hunt ’40 (whom Colson recruited at the Brown Club in Washington, DC) as a pulp novelist and CIA vet fixated on his Bay of Pigs past and worried about paying  his bills once he’s caught. It’s just a matter of time: racing to clean out his listening post after the Watergate burglars were caught, he left behind a check for $6.36 made out to Lakewood Country Club and signed E. Howard Hunt. Did he want to be caught? he wonders.

While Hunt swills milk to soothe his ulcer, his unflappable wife, Dorothy, shakes down LaRue for hundreds of thousands of dollars—until she is killed in a plane crash at O’Hare. Nixon’s longtime secretary, Rose Mary Woods, sends flowers, but her control freak of a boss, H.R. Haldeman—HRH, she calls him—chews her out for it.

Mallon has a particular sympathy for female characters, and he portrays Rose Mary Woods and Pat Nixon as loyally supporting the president but each hurting in her own way. Mallon gives Pat a soul mate to trade confidences with—a retired lawyer whom she meets in New York City. While transcribing Nixon’s secret Oval Office recordings, Woods erases the infamous eighteen minutes of tape, not to protect Nixon but because her feelings are hurt.

The doyenne of Mallon’s novel is the acerbic and entitled Alice Roosevelt Longworth, who grew up in the White House and has squandered her considerable intelligence on rarefied Washington gossip. At ninety, Alice is a tragic figure, and she sees in Nixon a fellow sufferer. After her daughter’s suicide, Alice comes to the White House in despair, and Nixon pulls a book from the shelf and reads a passage Alice’s own father wrote after her mother’s death: “And when my heart’s dearest died, the light went from my life forever.”

Remembering Nixon bearing her daughter’s casket earlier that day, Alice notes “the creased naked expression on this darkest of dark horses, this misanthrope in a flesh-presser’s profession, able to succeed from cunning and a talent for denying reality at close range.”

Nixon was a genius at denying reality. And, strangely, for all its leaps of imagination, this fiction offers a piercing glimpse of the truth. The Richard Nixon who emerges in these pages is, yes, a misanthrope in a flesh-presser’s profession. And he is also surprisingly touching.