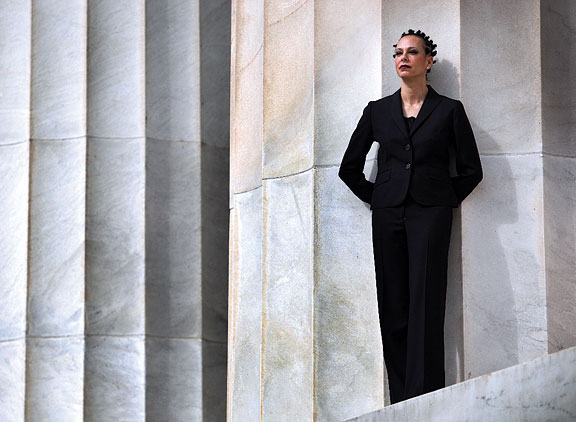 When Saar learned about child prostitution on Craigslist, she took a stand.

In April that year, Malika Saada Saar ’92, cofounder and executive director of the Washington, D.C.–based women’s advocacy group the Rebecca Project for Human Rights, learned more about who was being sold through these ads. In one case the group discovered that an eleven-year-old girl was being pimped to grown men. The pimp, who went by the nickname “Daddy Day Care,” made $1,500 a night from the girl’s sexual services. In another case, a teenage girl was kidnapped and sold for sex for ten hours every night at truck stops and cheap motels. Her pimp netted $30,000 a month through Craigslist ads.

Within months, the Rebecca Project, with several other nonprofits, began buying its own ads in major newspapers, detailing the plight of these two girls. Written in the form of a personal letter from the prostituted girls to Craigslist founder Craig Newmark, the ads concluded, “Please, Craig, close down the Adult Services section.” The Rebecca Project also brought the girls to Washington to meet with members of Congress as well as Vice President Joseph Biden and Attorney General Eric Holder. Craigslist soon buckled under the media attention and shut down its adult services section.

The controversy catapulted Saar to national prominence, but it was by no means her first battle on behalf of female victims. In 1993 she founded the Family Rights and Dignity program to help homeless mothers in San Francisco, who were in danger of losing their parental rights. Her work at the Rebecca Project also included helping drug-addicted women find rehabilitation programs as well as advocating for the rights of female prison inmates.

Saar, who is married and the mother of three children, grew up lower middle-class in Philadelphia. She describes herself as African, Arab, Jewish, and white. She says she felt out of place at Brown at first. “My economic reality was modest by comparison” to that of her fellow students, she says. But thanks to her Brown mentor, Associate Professor of Political Science and Public Policy Ross Cheit, she found her passion. “Professor Cheit was so wonderful at taking those of us who believed in public service and raising us,” says Saar, who was a double concentrator in American civilization and education. “I had no money at Brown. He bought my books for his class.”

Saar went on to earn a master’s in education from Stanford and a law degree from Georgetown. “I needed knowledge of the law to effectively use civil rights to advocate for human rights,” she says. She volunteered at prisons, where female inmates told her horrific stories about sexual abuse and exploitation. Some had fled their homes to escape violence, only to be arrested for truancy. The situation struck Saar as profoundly unfair and destructive.

During her ten years at the Rebecca Project, the organization received more than $200 million in federal funding for drug rehabilitation programs. It also began an effort in Ghana to educate girls and young women about pregnancy and family planning.

Late last year, Saar left the Rebecca Project to join with four women’s-rights attorneys to form the Human Rights Project for Girls in Washington, D.C. The group focuses on stopping domestic child trafficking and on aiding girls in the juvenile justice system. Saar and her cofounders have already convinced President Obama to allocate $5 million in federal money for support services for young victims of trafficking.

“Domestic sex trafficking is the only child-abuse situation where we put the children behind bars,” says Saar. “We have to reframe the mindset so it’s the adult buyer, not the girl, who is the criminal.”