When she was seven, social services workers removed Francesca Zetar from her Los Angeles home. A neighbor had seen Zetar’s mother mistreating her and called the police. Zetar’s father, a Vietnam veteran who never lived with the family, was murdered when his daughter was five months old. At the time of his death, he was living on the street. 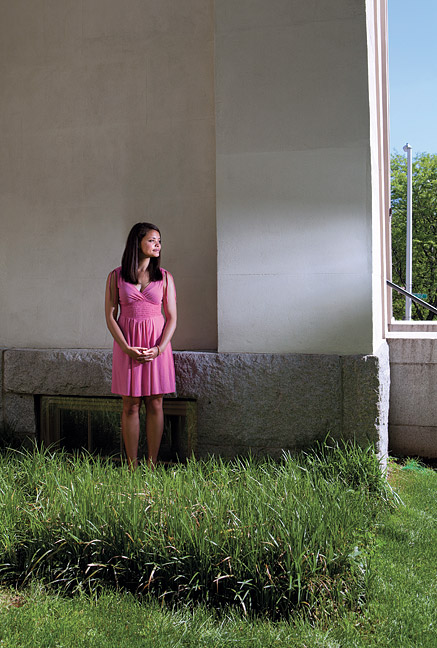 And so Zetar entered the foster care system. In her first foster home, Zetar says she was neglected: “The mother was only doing it for the money.” That’s why there were five other foster kids living there as well.

When she was twelve, a neighbor of Zetar’s biological mother offered to take her in. “She was very good to me in the beginning,” Zetar says.

But this changed around high school. When she began excelling at school, the woman became strangely hostile. In Zetar’s sophomore year, the California Community Foundation awarded her a Christopher Warren Scholarship, named for the former Secretary of State and given to Los Angeles high school students who show great academic talent and promise. “You don’t deserve it,” her foster mother told her. “He gave you that scholarship because he felt sorry for you.” She began throwing away Zetar’s mail. She moved her into a walk-in closet, barely big enough for a single bed.

Fortunately for Zetar, who is half white and half African American, her guidance counselors and teachers recognized how talented she was.

“It just felt good to do my school work,” she says. “It felt like something that needed to get done.” At twelve years old, she says, she had realized on her own that she was watching too much TV and needed to focus on homework.

She also began taking dance classes, finding in them what she calls “a way to escape.” She spent afternoons in the library, in part to study and in part to stay away from her foster mother. Typically she didn’t get home until ten at night. She knew that by then everyone in the house would be asleep.

About two months before matriculating at Brown, Zetar left her home for good. She stayed with friends until she arrived on campus for a summer orientation program. From then on, home would be Rhode Island. To make ends meet as an undergraduate, Zetar worked at the Sciences Library as a student assistant. Here, too, she found adults eager to take her under their wing. The library staff offered her advice when she felt overwhelmed or plagued by self-doubt. When she had nowhere to go for holidays, staff members invited her to their homes. Sometimes they took her shopping, and they helped her prepare her résumé and cover letters.

By junior year, Zetar had lost all contact with her biological mother, but when she learned she’d become homeless, she realized she felt a natural sympathy for people with no place to go. “It’s the idea of having no one in your life who cares for you,” she says.

Zetar began working with homeless people through the Swearer Center for Public Service. She ran a program that gave homeless people cameras so they could chronicle their lives. At the Rhode Island State House she advocated for legislation for the rights of the homeless. “I feel that everyone should have a home,” Zetar says.

After graduation, Zetar began working for College Visions, a nonprofit organization in Providence that helps low-income high school students apply to college. Eventually, she plans to work in the area of social services. She says she never wants anyone to endure what she did.