When Nick Donias was a junior in high school near Fort Worth, Texas, he arrived home one day to find all his family’s possessions in boxes. His mother, a receptionist, and his father, an auto-mechanic, hadn’t worked in months. Unable to meet the rent, the family was splitting up and moving in with relatives. 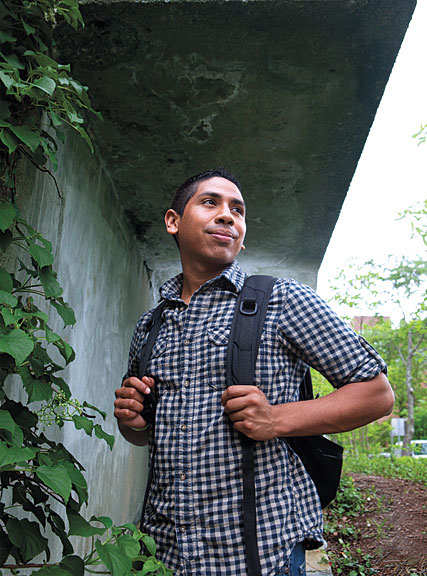 Donias’s high school was in Keller, an affluent Fort Worth suburb. His family had lived there during those better times, thanks to his father’s job at an engineering firm. After the work ran out, the family had to move out of the town for cheaper housing, but Donias insisted on staying at the Keller school. He commuted forty minutes to Keller, or stayed over at friends’ houses. Sometimes he slept in a secluded spot on school grounds.

Now, with high school graduation less than two years away, Donias’s family would be moving even farther from Keller. His parents told him they didn’t see any point in their son’s staying in his current school. They couldn’t afford to send him to college anyway. They suggested he join the military. Donias resisted. He cried. Then he gathered all his clothes, packed them into his car, and drove away. He was now on his own. “I realized,” he says, “I didn’t have a place to call home anymore.”

For the next two years, Donias says, he took things “day by day.” He slept in his car or visited friends. As the evenings wore on, he’d pretend to fall asleep on their couches, hoping they’d let him spend the night rather than bother to wake him. He used his 1980s-era Honda sedan, which his father had repaired, and gave other students rides, using the money they gave him for gas to buy ninety-nine-cent meals at fast-food restaurants. As a member of the track team, he had access to the locker rooms and the showers.

Donias never told his fellow students or his teachers about his plight. “I was embarrassed by it,” he says. “I dressed a certain way to make myself seem like I was affluent. I yearned to be like everyone else.”

Donias often sought refuge at the local library. He began looking at college guides, and it was then, he recalls, that he first heard the term Ivy League. Without knowing, he says, “what a long shot it would be,” he applied to Brown, whose eclectic students, open curriculum, and creative approach particularly appealed to him. “I needed something to hope for,” he recalls, “to escape from my situation.” He graduated second in his high school class and was accepted at Brown.

Donias, who is gay, was struggling with his sexual orientation. Raised a devout Christian, he prayed constantly to God to forgive him for his homosexuality. Although he guarded his secret in high school, at Brown he came out during his first week on campus. Near the end of his freshman year, after he heard President Ruth Simmons speak about her own impoverished upbringing, he began telling other students about his family and background. He studied neuroscience and created his own class, focusing on how we form our identities. For his final project, he created a video exploring his Christianity, his homosexuality, and his Mexican American heritage. For someone who’d hidden for so long, it felt liberating.

“I never allowed myself to be a complete person before,” he says. “I found out at Brown I could be Nick, the complete Nick. I didn’t have to hide.’

This winter, Donias will go to Brazil on a Fulbright Scholarship to teach English and study AIDS outreach programs. In the long run, he wants to go to medical school, then return to Texas. He says he is inspired by something a mentor at Brown told him: “If people like you don’t go back to where they come from, things don’t change.”