At a May 24 dinner celebrating Ruth Simmons’s presidency, the Corporation made a surprise declaration that the spot where the dinner was being held was no longer to be known as Lincoln Field. It would be “henceforth and in perpetuity known to all as the Ruth J. Simmons Quadrangle,” read Chancellor Thomas J. Tisch ’76 as he presented Simmons with the plaque pictured here. 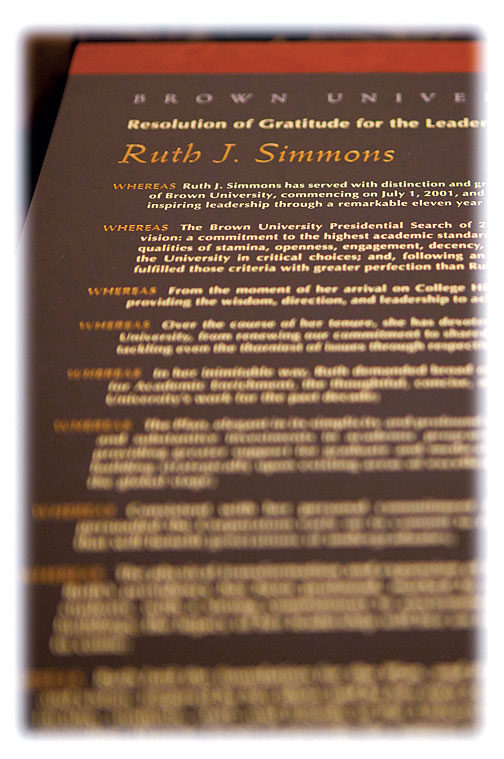 Part of the college’s original 1770 grounds, the “lower campus” was “nothing more than a swamp, partly covered by water, inhabited by a numerous colony of musical bull-frogs,” one early observer wrote. In the 1880s, after a lot of dredging, the swamp became a baseball field and was named for John Larkin Lincoln, a professor of Latin. At the opening game, a ball went through a window of St. Stephen’s Church, prompting a hasty relocation of home plate.

In 1899, baseball moved to Andrews Field on Camp Street, and in 1901 Frederick Law Olmsted drew up a plan for grading Lincoln Field and siting buildings along its flanks. His plan for a walkway leading north toward Pembroke remained unrealized until Simmons built what is now the Pembroke Walk.

The Corporation said it chose Lincoln Field to honor Simmons because it is home to buildings used by all four academic disciplines. “The last eleven years have been a remarkable time of change for Brown,” the Corporation said in a statement. “Ruth, we will be in your debt for many years to come.”