Professor-at-Large Carlos Fuentes, the renowned Mexican novelist and public intellectual, died at his home in Mexico City on May 15 at the age of eighty-three of an internal hemorrhage. Internationally heralded for his political sagacity and for his writings, Fuentes had been on the Brown faculty since 1996. Each spring he returned to campus to teach, to give readings and lectures, and to participate in international conferences on literature and politics sponsored by the Department of Hispanic studies. 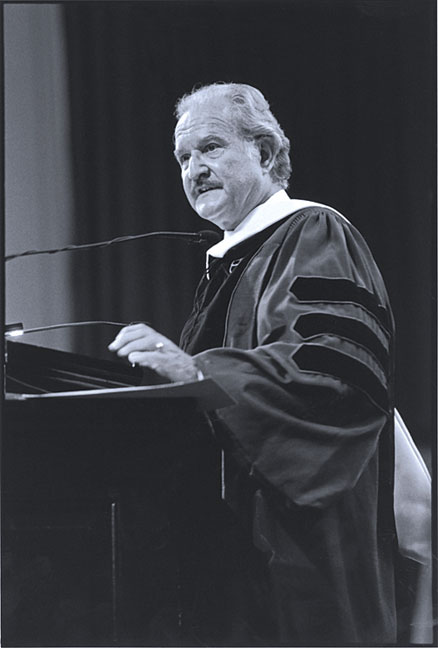 On April 10, just weeks before his death, Fuentes delivered a lecture titled “Mexican Times,” which John Carter Brown Library Curator Ted Widmer believes was Fuentes’s last lecture. His talk, Widmer wrote on the library’s blog, “wove brilliantly between the past and the present, and between Mexico and the Colossus to the North. Characteristically, it included a candid and sometimes searing critique of his country’s serpentine progress toward democracy; but also manifested an unyielding pride in Mexico’s history. Throughout, it was leavened by his irrepressible humor and the sly look in his eye that suggested he knew something he was not revealing.”

Along with Gabriel García Márquez and Mario Vargas Llosa, Fuentes was among the writers who triggered El Boom, the enormous surge of Latin American literature in the 1960s and 1970s. Fuentes wrote big novels that were at once specifically political and broadly universal. Many consider his 1962 The Death of Artemio Cruz to be his masterpiece. The Old Gringo, published in 1985, was the first Mexican novel ever to become a best-seller in the United States and was made into a 1989 film starring Gregory Peck and Jane Fonda. The New York Times Book Review described Fuentes’s 2011 dark comedy, Destiny and Desire, as “not exactly a parody of War and Peace, but certainly a spectral, playful revision of the idea of a novel that competes with history.”

Fuentes was first invited to Brown by President Vartan Gregorian. The novelist accepted an appointment in Hispanic studies in 1996, and Brown gave him an honorary doctor of humane letters in 1997. Over the course of his lifetime, he received literary prizes of the highest order, including France’s National Order of Merit (the top honor given to a foreigner) in 1997 and Spain’s Prince of Asturias Prize for Literature in 1994. Fuentes received the Cervantes Prize, which is the Spanish-speaking world’s highest literary honor, in 1987. He was repeatedly shortlisted for the Nobel Prize in literature.

Fuentes is survived by his wife, Mexican journalist Silvia Lemus, and a daughter, Cecilia, from his previous marriage to actress Rita Macedo.