Once upon a time, Chia Chen-Speidel, an urban studies major, really, really wanted to work in a city. During the summer after her sophomore year, she earned an internship at the Stormwater Management Program in San Francisco, part of the city’s Port Commission. 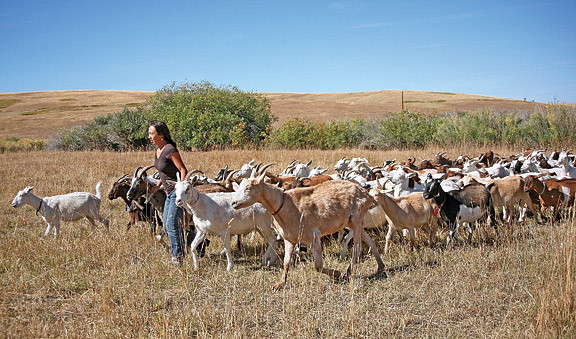 Bob Zellar
Chen-Speidel makes her living- and achieves a kind of zen- by herding goats in Montana.
“If I had to imagine an ideal job in urban studies, that would be it,” Chen-Speidel says. But, to her surprise, she didn’t like the grinding daily commute to a bland office building. “The office life and culture, and living in San Francisco, brought me down,” she says.

So for her next internship, Chen-Speidel became a goat herder in Montana. Working at Healthy Meadows, a company based near the Yellowstone National Park, she led the animals from ranch to ranch so that they could eat toxic weeds. This approach to weed control is more environmentally friendly than spraying pesticides and more efficient than employing humans.

“Little did I know how much I would grow to love it,” Chen-Speidel says. “I had never been so happy as I was that summer.”

This May, she married the founder of Healthy Meadows, Ivan Thrane, and is now a part owner. The couple is expecting its first child this autumn. “It’s very physical to walk the goats, herd the goats,” Chen-Speidel says. “There’s a lot of down time, too. The classical image of the herder in the hills with his flock and playing his hand pipe leaning against a tree is very true. There are periods of rest, quiet, and solitude.”

Montana’s ranchers spend roughly $100 million a year to control and eradicate such invasive plants as leafy spurge and knapweed, which squeeze out the grass on which cattle graze. Companies using goats for weed removal have been sprouting up all across the American West, but around Healthy Meadows’s base near the city of Red Lodge, there’s no competition. “We’re fortunate about [having no competition],” Chen-Speidel says, “but we also wish there were more people doing it” rather than relying on herbicides.

The company now has 250 billies, nannies, and kids, and the goats work hardest in the summer. Healthy Meadows tries to book clients that are near one another so they can easily move the animals from one plot to the next. On an average day, the herd walks four to seven miles. The average customer has twenty acres of land, which can take one to three days to clear. Healthy Meadows has also been hired to clear a ski resort and a vast tract owned by the U.S. Bureau of Land Management.

“They’re choosing the goats because they can get places where people can’t get to,” Chen-Speidel says. “There are a lot of steep slopes where it’s too dangerous to spray.”

The drought that parched much of the country last summer presented both opportunities for growth and financial burdens. Some customers hired the goats to eat dry brush to reduce the fire hazard near their homes. But the arid conditions also resulted in less grass available for grazing, which meant farmers had less use for their service.

“We’re taking it one step at a time,” Chen-Speidel says. “It’s all part of our plan to make a living off of our animals and off of the land.”