Campus in the Summer

Used to be, the campus dozed in summer. After graduates crammed all their stuff into their parents’ minivans, a lull would settle over the College Green. But in recent years summer’s been a busy time. 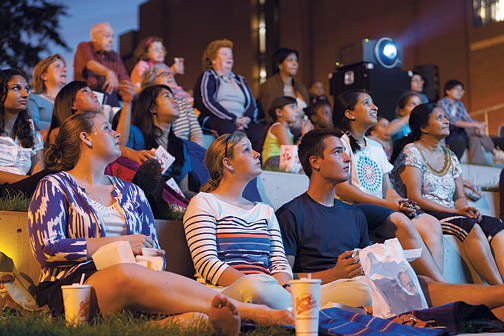 Scott Kingsley
Fans of all ages flocked to an outdoor screening of Toy Story at the Granoff Center August 7.
For one thing, it’s the season for building things. Shortly after Commencement in May for example, chain-link fences went up around some dorms as work crews renovated Keeney Quad, 315 Thayer, and the Miller, Metcalf, and Andrews Hall complex.

Over the course of the summer more than 4,500 students came to campus for various lengths of time. In addition to the undergrads who stayed to take courses, volunteer at the Swearer Center, or help professors with research and course development, almost 2,600 high school students from eighty-one countries arrived on campus to give college life a try. (“It’s a little United Nations,” said Robin Rose, who oversees Summer Studies for the Office of Continuing Education.) At first you’d see them wandering shyly about, wearing their summer-student red lanyards. By midweek, though, they bustled confidently into classrooms and headed down Thayer Street for frozen yogurt in the evenings.

The youngest students were local middle school kids building robots in the SPARK program, a science day camp. High schoolers took courses ranging from the popular So You Want to Be a Doctor to an environmental studies regimen at the Haffenreffer Estate on Narragansett Bay.

Two hundred high school students were enrolled in the Brown Leadership Program. Rose says that in addition to learning such things as public speaking and group problem solving, they learn to apply those skills to social justice issues. In one class, for eample, a team presented its recommendations for U.S. policy toward Syria. In another, students represented humanitarian agencies during a crisis modeled on the Haitian earthquake. Their instructor, Cate Oswald ’04, worked in Haiti during the disaster and its chaotic aftermath.

Not all the summer visitors were so young. In June, 145 professors from around the world converged on the Watson Institute for the third Brown International Advanced Research Institutes. Now in its third year, BIARI brings young scholars from much of Asia, Africa, and Central and South America together with Brown faculty and guest speakers for intensive two-week discussions of such concerns as climate change, and HIV and AIDS.

In early July, the Choices Leadership Program brought another crop of grown-ups to Watson: about twenty U.S. educators, mostly high school social studies teachers, who were introduced to curricula on subjects ranging from Afghanistan to Zimbabwe. This fall, the teachers are back in their own schools, where they are preparing their colleagues to teach this summer’s topic, Competing Visions of Human Rights: Challenges for U.S. Policy.

Summer is a time for playing games, and judging from the athletes around campus, there was a lot of game playing going on. The athletics complex hosted sports camps for youngsters, as well as preseason practices for Brown athletes. You name the sport, someone was playing it: squash, tennis, football, lacrosse, water polo, field hockey, volleyball, fencing, baseball, or wrestling.

Brown drama productions, meanwhile, drew a steady stream of theater buffs to campus, while a free movie series lured an audience to the Granoff Center’s outdoor amphitheater for an evening screening of Toy Story. Octogenarians, college students, teenagers, and toddlers all sat laughing on the grass in the cooling air, proving that humor transcends the ages.

Reader Responses to Campus in the Summer