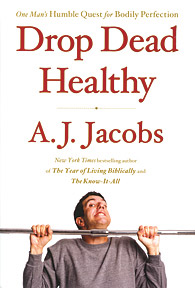 Drop Dead Healthy by A.J. Jacobs ’90 (Simon & Schuster). Having honed his mind (The Know-It-All), and his spirit (The Year of Living Biblically), Esquire editor-at-large Jacobs now turns to the flesh. He experiments with mindful eating, chewdaism, Paleo, and raw food diets. He tries AntiGravity yoga, CrossFit, pole dancing, and something called “Strollercize.” He even hauls a tree trunk around Central Park with scantily clad neo-cavemen. His account will make you laugh out loud, the best medicine of all. 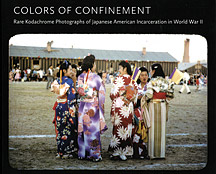 Colors of Confinement edited by Eric L. Muller ’84 (University of North Carolina). Most pictures of Japanese internment camps are the work of documentarians and military photographers. These were taken by a mechanic named Bill Manbo, who was among the 10,000 Japanese Americans moved to Heart Mountain Relocation Center in Wyoming. Using newly invented 35mm Kodachrome film and a makeshift tripod, Manbo portrays his family and friends. He poses his toddler son in a tiny pilot’s leather jacket, cap, and goggles eating an ice cream cone. In a less sanguine portrait, the boy grasps a barbed-wire fence. 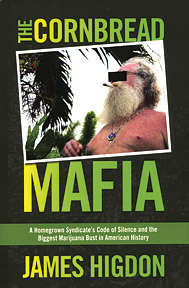 The Cornbread Mafia by James Higdon ’00 MFA (Lyons Press). In October 1987, Minnesota police spied a field in which one of the largest pot crops on record was hidden by corn: “two long rectangles of dark green, each longer than four football fields end to end,” Higdon writes. It was the masterwork of Kentucky pot farmer Johnny Boone, now a federal fugitive. Higdon tells the story of Boone’s rise from moonshine distiller to pot grower in fascinating detail and with a freight train’s momentum.

Goodbye to All That by Judith Arnold (pen name of Barbara Keiler ’76 AM) (Bell Bridge Books).

Out Beyond the Verrazano by Terrence Dunn ’79 (Lulu.com).

When America First Met China: An Exotic History of Tea, Drugs, and Money in the Age of Sail by Eric Jay Dolin ’83 (Liveright Publishing Corporation).

The Springs of Namje: A Ten-Year Journey from the Villages of Nepal to the Halls of Congress by Rajeev Goyal ’01 (Beacon Press).

Exodus to Shanghai: Stories of Escape from the Third Reich by Steve Hochstadt ’75 AM, ’83 PhD (Palgrave Macmillan).

Robert Duncan, The Ambassador from Venus: A Biography by Lisa Jarnot ’94 MFA (University of California).

Future Perfect: The Case for Progress in a Networked Age by Steven Johnson ’90  (Riverhead Books).

The Doctor Dissected: A Cultural Autopsy of the Burke and Hare Murders by Caroline McCracken-Flesher ’86 AM, ’89 PhD (Oxford University Press).

Among the Creationists: Dispatches from the Anti-Evolutionist Front Line by Jason Rosenhouse ’95 (Oxford University Press).

Mapping Europe’s Borderlands: Russian Cartography in the Age of Empire by Steven Seegel ’00 AM, ’06 PhD (University of Chicago Press).

Sailor Twain or The Mermaid in the Hudson by Mark Siegel ’89 (First Second Books).

Dropping the Gloves: Inside the Fiercely Combative World of Professional Hockey by Roger Vaughan ’59 and Barry Melrose (McClelland & Stewart).

The Open Door: One Hundred Poems, One Hundred Years of Poetry Magazine edited by Don Share ’78 and Christian Wiman (University of Chicago Press).

All in the Family: The Realignment of American Democracy Since the 1960s by Robert O. Self (Farrar, Straus & Giroux).