Phil Estes leads by example. When Estes, the head football coach, asks his players to get involved in community service, he’s not just mouthing clichés. He practices what he preaches. During this last off-season, for example, he organized the “Angry Bears” bike ride. Estes, along with his wife Kate, defensive coordinator Mike Kelleher, and Kelleher’s wife, Betsy, became the Angry Bears cycling in the Des Moines Register’s Annual Great Bicycle Ride Across Iowa. The Brown coaches and spouses were in it to raise money for cancer research as a way of supporting football alumnus Bill Perry ’88 as he battles thyroid cancer. 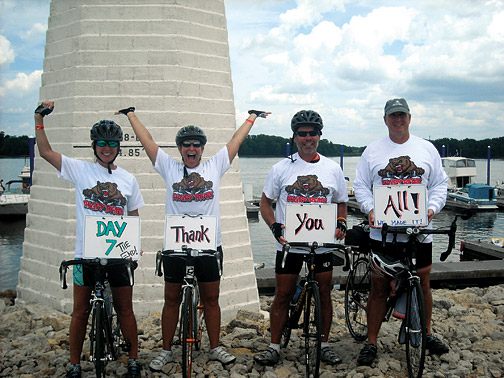 Courtesy Phil Estes
Kate Estes, Betsey Kelleher, Mike Kelleher, and Phil Estes at the end of the Annual Great Bicycle Ride Across Iowa. They rode to support Bill Perry '88, who is battling thyroid cancer.
It’s no surprise, then, that Estes’s players are involved in everything from the Bench Press for Cancer to the Be the Match Bone Marrow Donor Registry Drive. Through the bone marrow drive, which the team has hosted for the past three years, players have helped register about 600 potential marrow donors in the National Marrow Donor Program’s Be the Match Registry. For many patients with diseases such as leukemia, a bone marrow transplant from an unrelated donor is often their last hope.

Two Brown players, including safety Matthew Shannon ’14, recently learned they were potential matches. After being notified in February, Shannon underwent further testing to determine if he was the best match for the recipient. The odds of being a perfect genetic match are 80,000 to 1.

This spring, a week before finals, Shannon got the call. He was a perfect match.

“Time stood still for a second,” Shannon says. “I was hoping for the phone call. I wanted to make a difference. I wanted to help.”

After completing his finals, Shannon flew home to Ohio for more physicals and blood work. He then traveled to Washington, D.C., to undergo surgery to remove marrow from his pelvis. By early June he was back home recovering.

“Any pain or sacrifice that I made in this process is nothing compared to what [the patient] is going through,” Shannon says. “It was definitely worth it.”

Shannon knows very little about the person who was implanted with his marrow, not even his exact disease. But six weeks after the patient’s procedure, Shannon learned he was out of the hospital and doing well. Shannon says he may get another update in late November or December, and after a year he may be able to meet the recipient face-to-face. “That would be pretty special,” he says.

Estes, who hails from Cedar Rapids, Iowa, entered a lottery to get into the Great Bicycle Ride Across Iowa, which covers 471.1 miles over seven days.

While Estes was preparing for the ride, he learned of Perry’s disease and recognized the opportunity to help. After he talked with the Perry family, the Angry Bears team was born, and the riders had found their purpose.

“Everything fell into place like this was supposed to happen,” Estes says. “If we can bring awareness to thyroid cancer and at the same time make people aware of what Billy and his family are going through, and how courageous and strong he is, I think it is a win-win for everyone.” 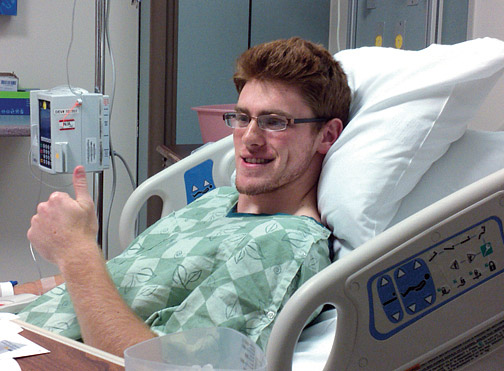 The Angry Bears raised more than $30,000 for Boston’s Dana-Farber Cancer Institute. The football team has also raised more than $80,000 for the American Cancer Society over the past six years with its Bench Press for Cancer fund-raiser, which now also includes athletes from other Brown teams. Coach Estes participates and is challenged to keep up with his players by alumni donors.

Throughout the year, the team is also involved with a special education class at the Vartan Gregorian Elementary School in Providence. In addition, players such as Michael Yules ’14 have taken on the responsibility of becoming a Big Brother and mentoring an at-risk child.
While the goal of much of the team’s community service is to raise awareness about certain illnesses, some of it is simply about helping out an individual. This spring, after former assistant coach Paul Gorham, a former Estes teammate at the University of New Hampshire, contracted idiopathic pulmonary fibrosis, he was airlifted to the Cleveland Clinic. While Gorham underwent treatment, Estes organized a calendar so that someone—a friend, relative, or fellow coach—would visit him at the clinic every day. Gorham underwent a double lung transplant and both his legs were amputated below the knee. In mid-July, Estes, Kelleher, and assistant coach Neil McGrath flew to Cleveland and rented an RV so they could drive Gorham back to his home in Connecticut.

“Our kids do a lot of different things that they think about and create on their own,” Estes says, “but it has always been a part of our football team to want to give back, or to ‘give forward,’ as we say, so they take that to heart as a team and as individuals.”