It’s All About Home

It started on the beach. In 2006, Julie Carlson ’83 was catching up with an old friend in Wellfleet, Massachusetts, the Cape Cod town where the two had grown up, and the subject turned to remodeling. As they traded war stories about houses they’d updated—a tired 1970s ranch in Mill Valley, California, for Carlson, and a Brooklyn Heights brownstone for her friend—it dawned on Carlson that the countless decisions they had made could help others in remodeling hell. 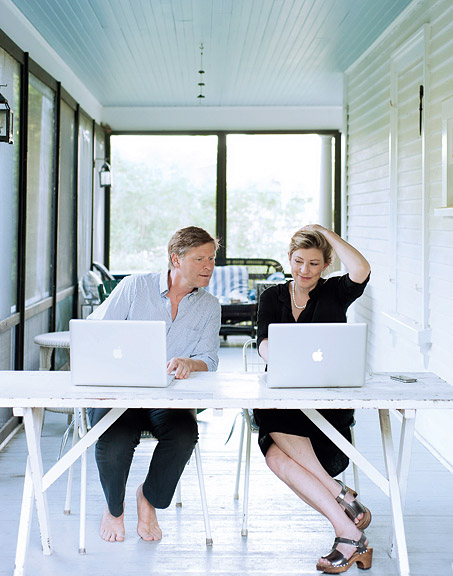 Matthew Williams
Josh Groves and Julie Carlson at home and at work.
From that conversation was born the design blog Remodelista.com, which Carlson founded in 2007 and edits. In 2008 her husband, Josh Groves ’84, signed on as publisher, and last year the digital publisher SAY Media purchased the blog, which now boasts half a million unique viewers a month.

Remodelers scan the site for big ideas—say, inspiring kitchen layouts—or use the product catalog to locate the perfect faucet. “From the very beginning, we wanted to make it easy for readers who were remodeling,” says Carlson, a former English student who credits the late Brown art historian William Jordy with inspiring her interest in architecture. She traces her design aesthetic to her Scandinavian roots and her childhood home in Wellfleet, an 1860 Victorian.

After graduation, Carlson worked in print journalism and copyedited for the New Yorker, which taught her “how to present clean copy,” she says, a useful skill in the blogosphere, where “you can have an idea in the morning, and the story is up that afternoon.”

Groves, whom she met at a party at Brown, was a law and society concentrator who also studied art history. A native of Amish country, he shares Carlson’s preference for clean, classic design. After Brown, Groves worked on Capitol Hill before earning his MBA at Stanford, the move that brought the couple to California, where their two children—Will, 16, and Darcy, 15—were born. Carlson worked as a style editor and freelance writer in San Francisco before launching her blog in 2007.

Meanwhile, Groves was CEO of Magex, a London-based online and mobile payments service provider, which was bought by the Royal Bank of Scotland in 2006. As his job began to require more cross-country travel, Groves became interested in turning the nascent blog into a commercially viable business, using banner advertising and an affiliate program through which remodelista receives a portion of outside-vendor product sales.

“We were lucky to start at the time of some of the first design blogs,” says Carlson. An early mention by Elle Décor, a “best home design blog” award from ApartmentTherapy.com, and a mention in the New York Times all boosted the number of readers—and fans. It didn’t hurt that some of those fans were style-makers themselves, including Gwyneth Paltrow, Martha Stewart, and Diane Keaton.

That growth continues. In May SAY launched a companion site, Gardenista.com, and Carlson is working on a book, due out in late 2013.

Reader Responses to It’s All About Home