When a NASA official announced in the early hours of August 6 that the Mars Science Laboratory rover Curiosity had landed safely on Mars, the engineers at Mission Control in Pasadena, California, hugged and cheered. So did the science team, which included Assistant Professor of Geological Sciences Ralph Milliken ’03 ScM, ’06 PhD. Since then, Milliken has been busy helping determine exactly what the rover has been doing. The goal is to study the rocks and soils of Gale Crater, producing data that will, over the years, help scientists like Milliken understand the geological history of the planet. Before the landing, Milliken discussed his role with Brown science writer David Orenstein. 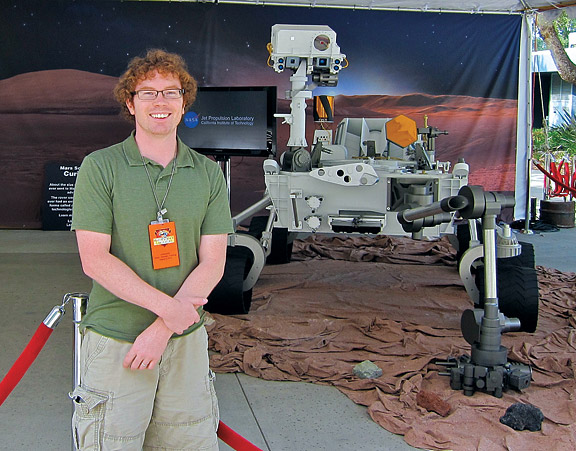 What has your role been?
As part of the science team, I’ll work with everyone else to look at the data, determine which instruments we want to use and for which purpose, which rock we might want to drill into, and make the case for the day-to-day science operations within the overall strategy to make sure the rover is accomplishing the mission’s goals.

What do you hope the mission will tell us about Mars?
In the grandest sense I want the mission to tell us more and something new about the geological history of Mars. The Curiosity rover is not strictly a life-detection mission. It is a mission that’s designed to go to a place on Mars and provide us information to be able to determine if that place had the right ingredients to be habitable for life. It has the capability to detect organic material if it happens to be present in the rocks or soil.

What questions are you asking?
The evidence suggests that Mars may have been warmer and wetter 4 to 4.5 billion years ago. Today it is a very cold and arid environment. That transition from wetter and warmer to colder and drier, from what we understand, probably happened about 3 to 3.5 billion years ago. The question is, why did that happen? Why did Mars take a different evolutionary pathway than Earth? What does such a drastic change on a global scale imply about the possibility of life on ancient Mars?

How is the rover equipped to help answer those questions?
The rover has a ton of different cameras. Some of them are for hazard avoidance and navigation, but there is a more sophisticated camera system on the mast of the rover that will be able to do 360-degree panoramas at a number of different wavelengths of light. That gives us the color images we can use to assess the local geology and search for variations in the minerals that are present.

It also has an instrument called ChemCam that shoots a laser at rock or soil targets and vaporizes them. We can look at the plasma that is created in this process and identify the chemical signatures of the rocks and soils that have been zapped by the laser, so this is one of our primary remote sensing tools for determining which rocks we might want to drive up to for additional analyses.

There is also a meteorology instrument on the rover that can tell us about the daily weather, including temperature, winds speeds, humidity, and atmospheric pressure.

The rover can actually go up to rocks, drill into them or scoop up the soil it’s driving over. It can take that rock or soil, crush it up, and pass it to instruments on the body of the rover.

How long will the mission last and how are you adapting to Mars time?
The primary mission is for one Mars year, which is nearly two Earth years. We hope that if things are going well it will keep getting extended. During the first ninety days, or ninety sols as we call them on Mars, we’ll actually live on Martian time. I haven’t lived on Mars time before but I know people who have done it for the other rovers. It can be quite disorienting. Blackout shades and curtains in your apartment are a must.