This introduced fish, the bighead and the silver carp, can grow up to one hundred pounds and eat as much as 40 percent of its body weight. 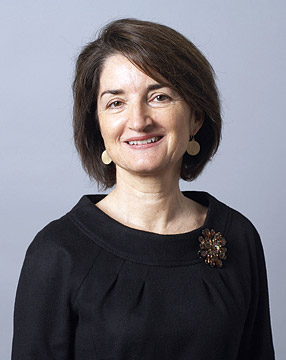 Courtesy Ellen Alberding
Through the Joyce Foundation, Alberding supports controversial causes.
Carp’s preferred food is plankton, for which it outcompetes indigenous fish. Since their escape into the wild during the 1970s, Asian carp have been making their way north up the Mississippi and Illinois Rivers and are now poised to pass through the Chicago Area Waterways System and into the Great Lakes, where they could cause an ecological disaster.

The Obama administration has spent $150 million in recent years on initiatives to hold them back. At a cost of $40,000 a month, the U.S. Army Corps of Engineers maintains an electrical barrier that zaps the fish as they try to enter the Great Lakes basin. Biologists hope to develop a better solution.

Enter Ellen Alberding ’79. As president of the Joyce Foundation, which awards $40 million a year in grants to charitable organizations and advocacy groups in the Great Lakes region, she commissioned a major study along with several other organizations. Released in January, the group’s report calls for a bold—and very costly—solution: blocking the Mississippi River from running into Lake Michigan. The price tag could be as high as $9.5 billion, and the project would take until 2029 to complete.

“We decided to investigate an idea that at first sounds wild-eyed and counterintuitive,” Alberding says. “While short-term fixes are put in place, we need to think carefully about the long term.”

An English concentrator at Brown, Alberding attributes the development of her writing skills to history professor Gordon Wood. “For two semesters he line-edited my papers,” she says, “and that really changed how I communicated.” After graduating, she worked in politics, public relations, and marketing before starting at the Joyce Foundation in 1989. When Alberding arrived at the organization, which was founded in 1948 by Beatrice Joyce Kean, its endowment stood at $280 million. Under Alberding’s leadership, it grew to $900 million. From 1994 to 2002, one of its board members was Barack Obama.

The foundation funds a variety of educational, environmental, and cultural organizations, but Alberding also hasn’t been shy about wading into controversial areas. According to Crain’s Chicago Business, the Joyce Foundation spends ten times more than any other funder to support groups that advocate for gun control, chiefly by supporting research on gun violence prevention. (The National Rifle Association still outspends the foundation by 100 to 1, however.)

When U.S. Representative Gabrielle Giffords was shot in 2011 near Tucson, Alberding put her writing skills to work by penning an essay for the Chronicle of Philanthropy. “The Tucson shooting makes clear that gun violence threatens not just public health and public safety,” she wrote. “It threatens the core of our democracy.”

Alberding recently began working with the Aspen Institute on an effort to improve community colleges. In 2011, the Joyce Foundation, the Aspen Institute, and a half-dozen other funders established the Aspen Prize for Community College Experience, a more than $1 million award given to the community colleges showing the greatest student improvement. Valencia College in Florida won the first year for its innovative programs to help students manage the academic transition from high school to higher education.

Alberding is also vice chair of the City Colleges of Chicago, which serves 120,000 students in that community. “The City Colleges should prepare workers to succeed in the Midwest,” Alberding says. “Right now only 7 percent of students graduate, and employers aren’t enthusiastic about hiring students. But this has begun changing.”

Reader Responses to Spreading the Wealth