October 27, 2012—Numbers matter. At least that’s one impression drawn from the inauguration of President Christina Paxson today. The ceremony, which took place on the College Green under changeable skies just a few days before Hurricane Sandy was due to arrive on the East Coast, had its share of notable guests, including Providence Mayor Angel Taveras, U.S. Senator Jack Reed, and Rhode Island Governor Lincoln Chafee ’75. ("Brown is a quintessentially Rhode Island institution," Reed told the audience. "It is fiercely independent and fiercely unique.") But it was outgoing Princeton President Shirley Tilghman who got the crowd going. 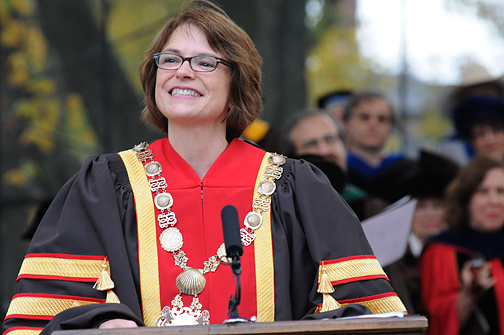 Noting that she and Paxson were now their universities’ nineteenth presidents, she joked about the significance of the number nineteen. It was not just any number, she said. The Nineteenth Amendment to the Constitution gave women the right to vote. And nineteen is a prime number—“not a multiple of less propitious numbers”—a metaphor for the qualities Paxson brings to her new job. Tilghman further ingratiated herself with her Brown audience by describing Princeton as “Brown’s farm team.” Not only had four of Brown’s last six presidents spent time at Princeton, Paxson had worked there for twenty-six years before coming to Brown.

Paxson has three qualities that, Tilghman says, make Brown and her “superbly matched”: the ability to listen thoughtfully, to forge consensus “whenever possible,” and to make difficult decisions and stick to them, even if they do not please everyone.

But it was Paxson who was the star of the afternoon. Her inaugural speech was a passionate defense of scholarly work during a bottom-line era, when the most pressing question asked about a college education is whether it will get a graduate a job. Acknowledging the great importance of that issue, Paxson, an economist, pointed out that today is not the first time in our history that a recession or depression has prompted leaders to attack universities for spending too much time and money on such things as the humanities or basic research

She cited a 1939 speech by Brown president Henry Wriston, who decried the growing criticisms of universities that arose during and after the Great Depression. The job of a university, Paxson said, is to prepare students not only to survive the world as it is today but to work to make it a better world. It’s Brown place, she argued, to teach students something “more nuanced but ultimately more valuable” than a trade, to teach “not just a curriculum, but intellectual curiosity, integrity, and imaginative thought.” 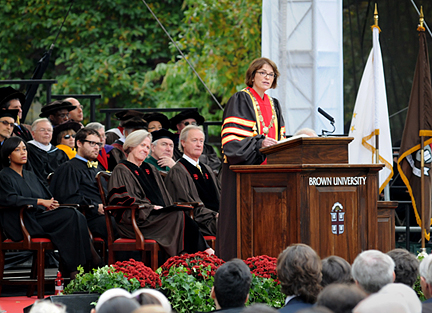 Frank Mullin/Brown University
"Scholarship," Paxson said, "is uncertain, difficult to measure, and [its usefulness] may not be realized for decades, or even centuries."
She referred to Abraham Flexner’s famous 1939 Harper’s article, “The Usefulness of Useless Knowledge,” in which Flexner argued, “Institutions of learning should be devoted to the cultivation of curiosity and the less they are deflected by considerations of immediacy of application, the more likely they are to contribute not only to human welfare but to the equally important satisfaction of intellectual interest.”

Or as Paxson put it, “Scholarship is uncertain, difficult to measure, and [its usefulness] may not be realized for decades, or even centuries.” Yes, universities must be in the forefront of solving today’s problems—she herself became an economist, she said, to understand the connection between resource allocation and human well-being—but if universities don’t take the long view in both science and the humanities, no one will.

As she concluded her speech, people in the audience began to look upward, first one head swiveling up, and then a few more, and finally those of the curious all around the Green. Directly overhead, a small crescent of rainbow had emerged among the clouds.