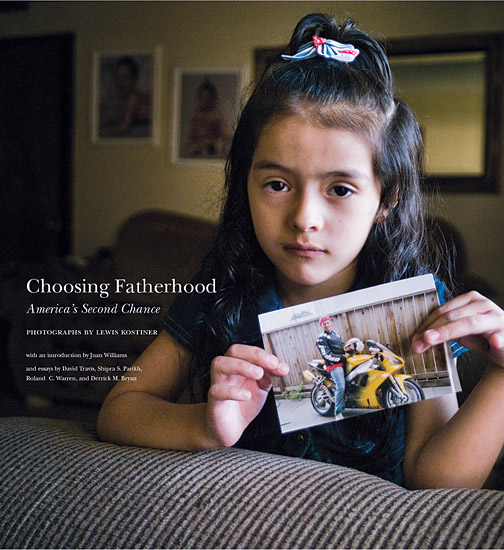 More than 24 million U.S. children have no father at home. One of three babies is born to a fatherless household. The picture gets even bleaker when you break it down by race and ethnicity. More than half of Hispanic babies and seven of ten African American infants will have no dad helping raise them. Those statistics, as well as the hollow left by his own father’s absence, prompted photographer Lewis Kostiner ’72 to undertake Choosing Fatherhood: America’s Second Chance, an unflinchingly candid, but hopeful, tribute to fatherhood.

Kostiner began this project in 2007, when his wife, Annie, urged him to attend a fund-raiser for a fatherhood organization in Chicago, where they live. Moved by a sense of crisis, Kostiner believed he could help more with his camera than with his checkbook. So he began a series of portraits of men involved in the National Fatherhood Initiative, which helps local groups across the country keep dads in their children’s lives.

Kostiner interviewed and photographed more than 150 fathers in thirty-nine cities and towns nationwide, and his portraits shatter every stereotype you’ve seen. These men come from every racial, ethnic, and socio-economic group. Some are starry-eyed new dads, while others are ex-convicts who missed their kids’ early years. Some never married, and others are struggling to stay involved with their kids despite a romance gone sour. Still others are grandfathers making up for lost time.

The frightening common denominator is that, like Kostiner, many of these men grew up without a dad’s regular presence. Having never known the strength and stability of a father’s love as boys, they have no model to help them as men. But as they undertake the hard work of being financially and emotionally present for their own kids, they have fallen in love. You can see it in their eyes or in a steady hand on a child’s chest.

When Kostiner was at Brown he studied photography at RISD with Aaron Siskind, whom he assisted for years after graduation. For Choosing Fatherhood, Kostiner spent just a few hours with each of his subjects, so these aren’t intimate portraits. Still, they feel honest. Strikingly composed, richly detailed, and handsomely printed, they are devoid of both irony and mawkishness. Their straightforwardness is reminiscent of Walker Evans’s and Dorothea Lange’s Depression-era portraits.

Kostiner accompanies each image with an excerpt from an interview with that man, and a series of essays puts the photographs in aesthetic, political, and sociological contexts. In a provocative introduction, Fox News’s Juan Williams describes holding his new grandson and unexpectedly weeping. “For the first time, I understood that being a good father means building a strong family, an act that traverses time,” he writes. “Being a good father reverberates long beyond our own life spans as an echo across the ages. The absence of a father has a similarly long-lasting impact.”

Kostiner avoids the cynical view that absentee fathers are deadbeats, workaholics, or irresponsible boys. Instead, he holds up a mirror to men who are doing their job to create the future. Aptly, Kostiner dedicates the book to his wife, Annie, and daughters Rickie ’10, ’11 AM, and Tess ’12 “for giving me a greater purpose in life.”