Allison Abbate ’87 has mastered a terrain that few have trod: the dark recesses of Tim Burton’s psyche. Having partnered with the famously eccentric filmmaker on three films, she says there’s nothing quite like Burton’s brain: “It’s a fun place to go. I know what he wants. He’s collaborative and inspiring at the same time. We have developed kind of a shorthand.” 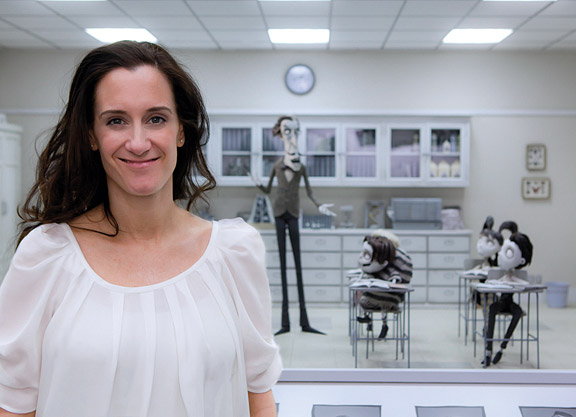 Leah Gallo
Producer Allison Abbate '87 on the Frankenweenie set.
In fact, Abbate, a former semiotics concentrator, has become a go-to producer for auteurs looking to bring their animated visions to the big screen, a grueling process that typically takes three years. Abbate has produced Wes Anderson’s Fantastic Mr. Fox and Brad Bird’s The Iron Giant. Her first collaboration with Burton was The Nightmare Before Christmas, and they followed that with a pair of quirky stop-motion films: the whimsically macabre Corpse Bride and this fall’s Frankenweenie. Inspired by Burton’s childhood experience of losing a pet, the new movie is a dark spin on the familiar boy-and-his-dog tale.

The road to animated success began at Brown, where one of Abbate’s teaching assistants was future art film director Todd Haynes ’85. Long before hobnobbing with Hollywood stars Johnny Depp (Corpse Bride), George Clooney (Fantastic Mr. Fox), and Jennifer Aniston (Iron Giant), Abbate, a Staten Island native, endured a series of unglamorous show business jobs in New York City working on low-budget horror films.
“I was literally on the Brooklyn Bridge stopping traffic with nothing but my hand,” she recalls of one such job. “Of course, they hadn’t paid us. And I remember thinking, ‘I’m going to Hollywood, where at least I can do this in the sunshine.’” 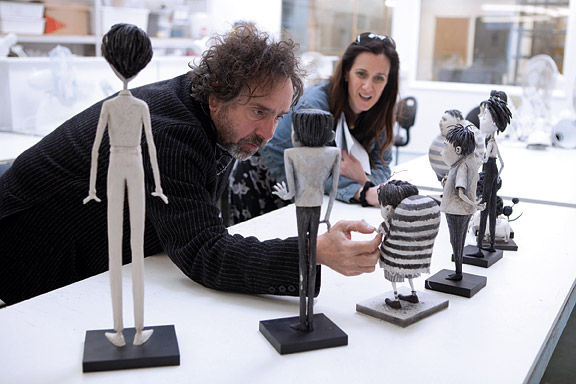 Leah Gallo
Abbate and director Tim Burton tweak Frankenweenie characters.
Once in Los Angeles, she landed a job as a receptionist on The Smothers Brothers Comedy Hour, which led to a temporary gig on Disney’s The Little Mermaid. Having spent her junior year steeping herself in Fellini and Taviani brothers films at the University of Bologna, Abbate had never imagined she’d be working in animation—much less on a children’s movie.

“I spent the day doing odd jobs, and I guess I did them well, so they hired me on to The Rescuers Down Under, and that was the beginning of the Disney renaissance,” Abbate says. “I felt like we were on to something pretty exciting. I thought, ‘What the heck, I’ll do animation.’”
Not surprisingly, given her semiotics training, Abbate has carved out a highbrow niche. “The nice thing about semiotics,” she says, “is that it taught you how to see and process the world in a creative way regardless of the medium.”

Abbate recently married animation director Tony Cervone, and she splits her time between a craftsman-style house nestled in the Hollywood Hills and a home in London, the stop-motion epicenter of the animation world.

In an interview this fall, Abbate described how she and Burton were sitting in a cramped London theater watching Frankenweenie dailies when suddenly she saw that she’d tapped into his childhood memory. “When we first saw the black and white come together, Tim was so happy, so pleased with how it looked,” she recalls. “It was literally a beloved thing coming to life.”