For her first job after Brown, Aleta Margolis ’89 returned to her hometown of Washington, D.C., and took a job teaching high school students in the juvenile detention system. “At the start of the year, few of my students were interested in reading or writing,” she says. “Most told me they hated school.” 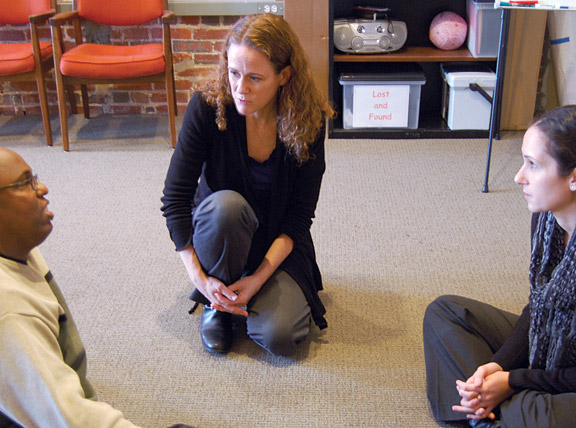 Courtesy Aleta Margolis
Margolis gets teachers to see thier jobs from a new perspective.
So Margolis took a different tack, asking her students to write a play about what they did care about. “By the end of the year,” Margolis says, “the students had written, produced, and performed a play about the city’s demise from drugs and gang violence, and its rediscovery in the year 3000 by a group of archaeologists.” The archaeologists uncover artifacts ranging from currency and crack cocaine to the diary of an eighteen-year-old boy.

Margolis is now executive director of the Center for Inspired Teaching, a D.C. nonprofit organization that trains teachers to use a similar approach. Teachers trained by Inspired Teaching are encouraged to develop flexible lesson plans that allow them to improve as needed. Instead of telling students what to do, instructors ferret out answers by posing questions. When teaching fractions, for example, teachers don’t say, “Multiply numerator times numerator and denominator times denominator.” Instead they ask, “When you multiply two numbers, you’re supposed to get more—right? So why is it that, when you multiply two fractions, you get less?”

With an annual budget of $2 million and partnerships with the D.C. and Baltimore school systems, Inspired Teaching runs yearlong professional development programs for teachers as well as a new-teacher certification program. “If I want students to understand what they learn and to be able to use it in the long term,” Margolis says, “I have to teach them how to think, not just what to think.”

Margolis, a theater concentrator, says she learned a lot about teaching from being an actor. A skilled theater director avoids direct instruction, she says, and instead asks the actors probing questions that help them obtain a deeper understanding of the script: “This approach results in a richer, more meaningful product, and, more importantly, a useful learning experience for the actors involved.”

In 1991, after she finished her stint teaching in Washington’s juvenile criminal justice system, Margolis went to Chicago, where she became a teacher at an inner-city middle school. There she was surprised to encounter in her students the same indifference she’d seen in D.C. She also saw that it wasn’t just the kids who lacked motivation. “Something within the system was causing teachers to disengage,” she says.

Margolis opened the Center for Inspired Teaching in 1995. Recently, the organization started the Inspired Teaching Demonstration School, which includes students from pre-school through fourth grade. The school uses a teacher-training model similar to the one hospitals use to train residents. Experienced “master” teachers work with less experienced ones who will later teach at other schools.

“The dream for the future,” Margolis says, “is for the norm to shift so that direct instruction, or spoon-feeding information to passive students, is a thing of the past.”