Mike Martin ’04 is a winner. As a player who was captain of the 2003–04 team, he was part of the winningest class in Brown basketball history, which posted an impressive 63–45 mark from 2000 to 2004 (39–17 in Ivy competition). Before Brown, he’d played on successful teams in high school and the AAU, and since graduation he’s enjoyed success as an assistant coach, helping Penn win an Ivy League title. As Brown’s new head men’s basketball coach, Martin hopes to keep winning at his alma mater. 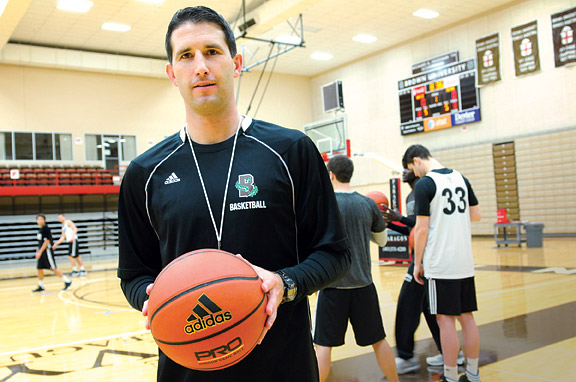 Frank Mullin
"The way we're going to move up in the Ivy League standings," Martin says, "is by being the most -prepared and hardest-working team."

Martin’s first task is to change the culture of the basketball program, which has had four straight losing seasons, going 39–79 over that span. His situation is similar to the one that greeted one of his coaching mentors, Glen Miller, who was the Bears’ head coach when Martin was a player.

“A lot of my coaching philosophies,” Martin says, “are derived from what I learned under Glen Miller. Hopefully Brown fans will remember the years when Coach Miller was at Brown. We led the Ivy League in scoring many of those years. Hopefully, we can take on that personality.”

Martin says his team will play in a style similar to the one that dominated when he was a player: a tough defense and an offense willing to push the pace. “Any team that I’ve ever been a part of that has won an Ivy League championship, or been one of the better teams in the league, has been that way because of defense,” Martin says. “So we’ve got to establish an identity on that end of the court.”

As a player, Martin was known as hardworking, and he now expects the same effort from his team and his staff, especially as good defense requires extraordinary effort and discipline.

“The way we’re going to move up in the Ivy League standings,” Martin says, “is by being the most-prepared and the hardest-working team. There is no secret formula to success. The only way I know is to outwork our competition and our opponents.”

As with any new coaching staff, there will be an adjustment period for the players. “I think anytime you have a new coaching staff in place, it is like starting all over,” Martin says. “Even though we only have two freshmen on our roster, really we have eleven newcomers to our system and our style, so I think there is going to be a natural adjustment there.”

Martin says the team is responding well to his changes. “If we are going to achieve our goals, and we are going to establish the way we want to do things going forward, it is going to take a complete buy-in from all eleven guys on the roster,” he says. “I’m excited and optimistic so far about their approach.”

The Bears face a challenging schedule this season. They’ll be playing Notre Dame and Northwestern, and on December 28 will face Big East foe Providence at Pizzitola, the first home game against the Friars since 1972.

“The Providence College game at home is going to be a special night for our program,” Martin says. “I think it is a great schedule, and we are hopeful that we can work as hard as we possibly can to put the best product we can out on the court.”